Less than a week after President Obama and other Democrats slammed the Supreme Court’s decision to discard portions of campaign finance legislation, 12 Senators spent the weekend in sunny Miami with 108 high-dollar lobbyists.

Hypocrisy on display. From Ben Smith at Politico, with a hat tip to Karl guest-blogging at Hot Air.

The guest list for the Democratic Senatorial Campaign Committee’s “winter retreat” at the Ritz Carlton South Beach Resort doesn’t include the price tag for attendance, but the maximum contribution to the committee, typical for such events, is $30,000. 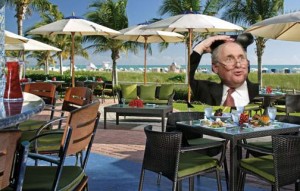 There, to participate in “informal conversations” and other meetings Saturday, were senators including DSCC Chairman Robert Menendez; Michigan’s Carl Levin and Debbie Stabenow; Bob Casey of Pennsylvania; Claire McCaskill of Missouri; freshmen Kay Hagan of North Carolina and Mark Begich of Alaska; and even left-leaning Bernie Sanders of Vermont.

Across the table was a who’s who of 108 senior Washington lobbyists, including the top lobbying officials for many of the industries Democrats regularly attack: Represented were the American Bankers Association, the tobaco [sic] company Altria, the oil company Marathon, the Edison Electric Institute, which has battled climate regulation, several drug manufacturers, the defense contractor Lockheed, and most of the large independent lobbying firms: Ogilvy, BGR, Quinn Gillespie, Heather Podesta, and Tony Podesta.

Let’s take a look at what Chairman Menendez had to say about big-money in Washington D.C. politics after the Citizens United decision at the Supreme Court.

Well, the big losers are the average American citizen. This is going to put enormous amounts of money and influence on behalf of big oil, health insurance companies, big banks, that are going to obviously support candidates who support their point of views.

You see, for politicians inside the beltway, it is perfectly fine for them to collect monster contributions from lobbyists, but it is unthinkable for businesses to contribute to campaigns.

The contrast between Menendez’s words and how he spent his weekend is a mark of how, even in the age of Obama, who has barred contributions from lobbyists, Democrats — and particularly Congressional Democrats — are riding a new wave of corporate support, the natural fruit of their majority status.

The first Monday in October

The Supreme Court and Obamacare