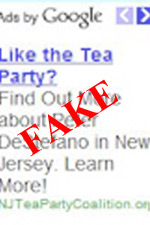 They think a small part of the electorate in New Jersey – especially the Republicans – are too stupid to figure out what’s going on. I’ll freely admit some likely GOP voters will blindly follow, but most of the blind-followers are normally associated with the donkey party.

The story is from the second week in October, but a new twist developed this week. Continue reading for background, but Google text advertising is showing up for the fake “Tea Party” candidate in New Jersey on various websites this week. They are pointing to the New Jersey TEA Party Collation website which is saying they had nothing to do with the ads.

Of course, if you click on the ad you’re directed to the site which includes the following video from the Republican candidate’s camp.

Clicking on the ad was never the intended purpose of posting it, it was simply in hope a small percentage of southern New Jersey voters would see the ad and be tempted to vote for the “Tea Party” candidate. The question is, who posted the ads?

Background
Democrat leaders in New Jersey figured a Tea Party candidate could easily split the conservative vote enough to almost guaranty a victory for the incumbent John Adler (D-NJ). The problem was, there was no Tea Party candidate.

So why not just create one and get ’em on the ballot in New Jersey’s 3rd? On Oct. 8, the Daily Record in New Jersey found out that’s exactly what the South Jersey Young Democrats did in May.

Internal numbers-crunching showed the difference between Adler and his Republican opponent — then undetermined — would hover around 5 percent. To give Adler an edge, Ayscue had recruited a then-unidentified man to run as a third-party candidate.

That candidate would act as a conservative spoiler to confuse voters and pull votes from Adler’s eventual Republican challenger. But first he had to get on the ballot.

With the filing deadline just weeks away, CCDC needed volunteers to hit the streets and collect signatures — fast.

Some of the SJYD members were stunned. Others willingly signed on.

By June 8, more than the 100 valid signatures needed were collected and received by the state Division of Elections.

That candidate was Peter DeStefano, a picture framer from Mount Laurel. On Nov. 2, he will appear on the “NJ Tea Party” line on the ballot. …

Several Democratic operatives who attended the May 26 meeting, or who have direct knowledge of the campaign or CCDC operations, spoke about the DeStefano plan on condition of anonymity, telling the Courier-Post they had ethical qualms with the Adler campaign. At least one pointed out the plan is already ostensibly working, since absentee ballots are being cast.

Sources said Adler’s congressional and campaign staff carried out the plan with the help of CCDC staffers and volunteers.

Of course, Adler immediately distanced himself from the plan, but it’s all about plausible deniability for the elites. There is a, wall of separation if you will, between the candidates themselves and the political operatives that act behind the scene to rig elections.

Big Government has been pushing this story to the national level since early October, and has more on the subject today.

John Runyan is the Republican running against Alder and many TEA Party members support Runyan. You can read more about Runyan – a former NFL football player – and the toss up race over at the Weekly Standard.

Concerning the Democrat’s creation of a fake “Tea Party” candidate? Runyan thinks an apology from Alder would be worthless.

Lie to New Jersey Gov. Christie … you goin’ down, down, down

Symptom of the Disease: Google, the White House and a $1.8 million fundrais...