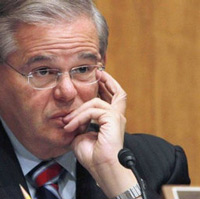 What scum. And let me point out if this guy was a Republican I’d be calling him scum too. These are the benefits you get from “friends” when you’re a United States senator. Pure corruption.

Sen. Bob Menendez (D-N.J.) needs to resign immediately. As soon as he caught wind the FBI was looking into allegations Menendez paid under-aged girls for sex in the Dominican Republic – which he has denied – he somehow remembered he owed $60,000 to a “friend” for a few private jet rides to the island.

Senate Majority Leader Harry Ried (D-Nev.) has been quiet so far, but if this was a Republican you can bet the media and Ried would be calling for their head.

Menendez came out yesterday and through a spokesperson let everyone know the private jet trips “have been paid for and reported appropriately.” Of course what the spokesperson did not tell us is that the flights were three years ago and he just paid for them within the last few weeks.

New Jersey Sen. Robert Menendez has written a personal check of $58,000 to reimburse a donor for two round-trip flights he took on a private jet to the Dominican Republic.

Menendez’s office said Thursday the three-year delay in paying for the plane trips with fundraiser and friend Dr. Salomen Melgen was an “oversight.”

“This was sloppy,” Dan O’Brien, Menendez’ chief of staff, told NBC News about the senator’s failure to pay for the 2010 flights at the time. “I’m chalking it up to an oversight.”

Oversight my ass. This is what Menendez thinks he deserves since he’s a United States senator. This is the culture of corruption – a phrase penned by Michelle Malkin – and this is another example of a Symptom of the Disease. Menendez and his staff are outright lying to you.

This comes at a particularly sensitive time, as Menendez is slated to take over for John Kerry as chair of the Senate Foreign Relations Committee.

Yeah? The Senate Foreign Relations Committee? Hell no. Kick his ass out of the Senate TODAY.

From Rags to Riches, the Harry Reid Story

Obama a skeet shooter? Not so much