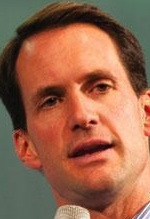 There’s a vote grabber. Democrat Jim Himes told Dennis House on Face The State he would vote yet another stimulus if the economy began to falter. Why? Because the last one worked out so well? One more reason not to vote for any Democrat.

Let’s see. The last stimulus spent, with interest, a trillion dollars. We were told we had to spend that money to keep unemployment below 8%, to create and save jobs and to end the recession. Well, it did none of those things as money went to a wide variety of pork filled projects like honey bees and SUVs and tunnels for turtles and battery factories for cars and let’s not forget the millions spent in LA that created just 50 jobs.

Amidst this, Himes thinks another trillion is a good idea? Oh brother.

Clearly, the left doesn’t get it. Spend is their only solution. Our money of course.

Howard Fineman: Hey, you folks in Connecticut are too smart to elect McMahon, well except Waterbury

Connecticut, what are you doing with your money? UPDATE
6 replies

Britt Hume and Juan Williams get it on: It’s not about trying, it’s...