New video from PJTV’s Steven Crowder on the lack of any sort of movement rebuilding World Trade Center Towers 1 and 2 at Ground Zero after more than eight years. Really good video, but rumor has it Crowder is departing PJTV.

Perfect illustration on how the government continues to muck up the works when things need to get done. We all wanted to rebuild bigger and better, but special interest groups and multiple government agencies – federal, state and local – can really mess things up.

It is really quite depressing to see nothing, and I mean nothing, happening at Ground Zero.

Something is up with Crowder’s position/relationship with PJTV. Ed Morrissey mentions …

We’re used to getting entertained by Steven, but this may be his best work yet. No matter where he winds up, he’s going to be worth watching. 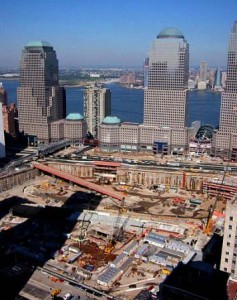 To the right is an image from Ground Zero in July 2002, and a shot (from a different angle) included in Crowder’s video.I completely understand significant underground work has been done … but we seem to be at a standstill.

Crowder notes it took 13 months to build the Empire State Building during the depression, but it did take between four and five years to build and complete Towers 1 and 2 in the late 1960s/early 1970s. (Breaking ground to completion.)

Of course, initial plans for the WTC came about in 1961, with plenty of “discussion” prior during the 40s and 50s since of course, it was a government project.

Oh my: Al Sharpton on MSNBC could provide comedy relief for years to come

So they take your choice away, but you can have it back for more money…

They are watching you
2 replies

Biden on vice presidency: It’s easy … you don’t have to do anythi...Get more Vicevich this weekend – podcasts available online
Scroll to top