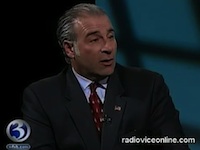 Like all good government proposals that intrude evermore into our lives, this one has been around for a long time. But the fact that it’s been resurrected again just proves the point that they just never have enough money. In this case Connecticut Democrats have once again resurrected the idea of tolls into and out of the state. But what happens when every state in the region decides it’s a good idea. Unlawful restraint?

From Sunday’s Face the State program, Democrat state representative Tony Guerrera gives his rationale as to why the state needs to put entry and exit tolls on Connecticut highways. The tax, and make no mistake its attacks, would charge people coming into and out of the state five dollars. The system he intends to use would work much like an easy pass. But pay close attention to what he would do if you don’t have an easy pass on your car. The state is in the best of hands.

Presumably the gas tax, which is already one of the highest in the country, would be cut substantially. But you and I both know that that will never happen. And consider this my little mobsters, Rhode Island is considering a similar tax. And what about New York, and Massachusetts?

Another shakedown, going through your pockets for a little loose change.

The UAW, both foreign and domestic