I’m serious. I’m waiting to hear about these supposed $2 billion in cuts. Total spending by the state of Connecticut has increased from $13.4 billion in 2001 to an estimated $26.1 billion dollars in 2011. That’s almost doubling the state budget in 10 years. Connecticut did not ride the TEA Party conservative wave, and we may just pay for it big-time.

Today, news broke from the capital that “there will be pain” with talks of an increase in the income tax for those earning more than $50,000 and couples earning $100,000. That’s a tax increase on the middle class and retroactive to Jan. 1. The tax increases do not end there. We’re talking HUGE across the board increases in taxes. The middle class and everyone else will also have to fork out additional tax dollars for cigarettes, gasoline, alcohol and almost everything you buy since Gov. Dannel Malloy’s (D) plan will include on a hike to the sales tax.

The governor and state legislature are going to have a damn tough time explaining this graph. The actual spending in 2009 was $21.33 billion, and it is estimated we spent $23.6 billion in 2010. The damn state – even in a period of recession – increased their spending by more than 10.6 percent in one year. (Chart from USGovernmentSpending.com) My pay increase the past three years has totaled less than 1.1 percent. How did you do?

Even if Malloy does somehow cut $2 billion, that would only return state spending to 2009 levels. Heck, we’d still be spending more than we spent in 2009! 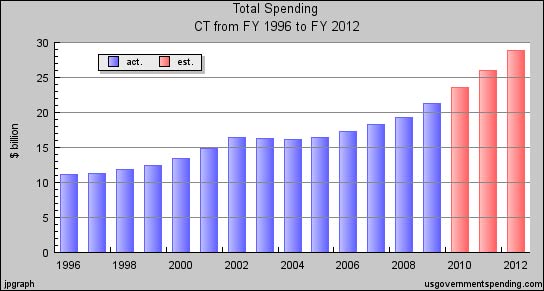 The Hartford Courant has more.

In one of the largest tax increases in Connecticut history, taxes on income, cigarettes, alcohol, gasoline, and estates would all increase under Gov. Dannel P. Malloy’s budget proposal to be unveiled Wednesday.

Great way to start. Maybe Gov. John Rowland was right today when he said this budget is dead on arrival, but with a Democrat legislature and a Democrat executive, I’m willing to bet they will try.

For middle-class homeowners, one of the biggest changes would be the elimination of the $500 property tax credit that Democratic legislators have supported through the years. In addition, the sales tax exemption for clothing and shoes under $50 would be repealed – meaning those items would now be taxable for the first time in many years. The property tax credit and the loss of the clothing exemption amount to a combined tax increase of $500 million per year.

Thousands and thousands of families who buy reasonably priced clothing for their family will get screwed. I can’t remember paying sales tax on any clothes I’ve ever purchased. If you have a couple of kids who grow like weeds and you shop at Target for clothes, you’re toast.

Taxes will increase on virtually all taxable items. The gasoline tax would rise by 3 cents per gallon, while the cigarette tax would increase by 40 cents per pack to $3.40. All alcohol taxes would increase, which Malloy says would amount to pennies on a six-pack of beer.

Overall, Malloy is proposing more than 50 different tax changes in a package that would increase taxes by $1.5 billion in the first year and $1.34 billion in the second year.

The sales tax would rise statewide to 6.25 percent, up from the current 6 percent, on all taxable items. In addition, cities and towns would be eligible to receive an estimated total of $24 million statewide from an additional .10 percent – meaning that the sales tax on some items in retail stores could be 6.35 percent.

Read the full Courant article for even more hits including eliminating the property tax credit. Don’t worry though, he’s proposing taking money from the middle and upper classes and handing earned income tax credits to the poor.

Fantastic. So, the governor’s budget is supposed to come to life on Wednesday. We’ll see if he actually cuts anything. Remember the total spending in past years… How much of the spending increases were “required” by employee and union contracts? That stuff is never negotiable. 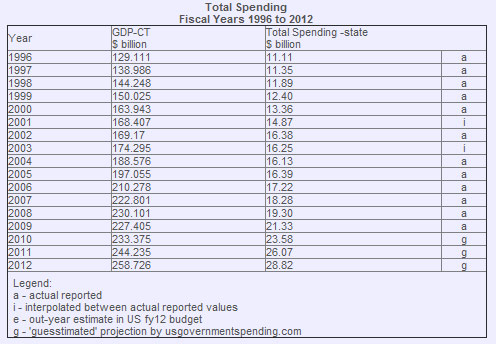 In January, Malloy supposedly told lawmakers he was going to rely primarily on budget cuts to make up the budget gap, and he’s refused to borrow from the bond market to pay day-to-day expenses and salaries for state employees.

If you’re wondering what it would look like with a Democrat in the Governor’s Mansion and Democrats running the state legislature, I think we’re about to find out in the coming weeks.

Where are the cuts?

Federal government spending, where to cut and trim

Do we need more politicians like New Jersey Governor Christie?

Our future lights…LED’s, well, perhaps, not so much
Scroll to top