Today’s interview with Col. Ralph Peters is below the fold. The colonel has always been a voice of reason when it comes to military matters, Iraq and Afghanistan. A noted soldier, author and columnist, I asked for clarity on the Fort Hood massacre when we set this up and he certainly gives it.

This was a cold blooded, premeditated, act of terrorism. There’s no other word for it. But I have to tell you, the Army also bears blame for this. The Army is so sick with political correctness that no one had the guts to take this guy on.

He argued with his patients about foreign policy, posting hate speech and praising suicide bombers on the internet, labeling himself Palestinian and no one, no one said this guy’s not fit.

Listen to the whole thing, but it really takes off about a third of the way through. Click on the play button…

And here’s what Ralph wrote in the NY Post this morning:

For the first time since I joined the Army in 1976, I’m ashamed of its dereliction of duty. The chain of command protected a budding terrorist who was waving one red flag after another. Because it was safer for careers than doing something about him. Get ready for the apologias. We’ve already heard from the terrorist’s family that “he’s a good American.” In their world, maybe he is. But when do we, the American public, knock off the PC nonsense?

Now might be the time to buy the Colonel’s book, The War After Armageddon

“Peters’ battle scenes are masterpieces of perspective…it is hard to imagine a better portrayal of modern war.” –Newsweek 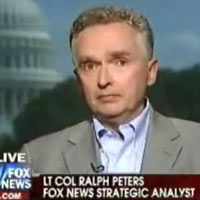 Putting America on trial - Sept. 11 will be our fault