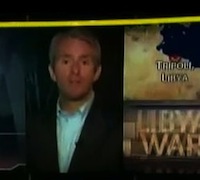 I mean if we are not attacking Gadhafi then what’s the harm? On the other hand … this sets a new standard for reporter involvement, heh?
Last night Fox news reported that CNN had been duped into bedng used as human shields for Gadhafi. Here’s the report from Fox.

But CNN says no … they knew exactly what they were doing… an so did … Fox. Heh?

Nic Robertson, a veteran CNN correspondent who was part of the CNN crew cited in the Fox story, called the rival network’s report “outrageous and hypocritical.”
Robertson said a Fox staffer was among the journalists on the trip — a fact left out of the Fox report — and that the journalists in the group were hurried through their trip by their minders.
“To say it was a human shield is nuts,” Robertson said, later adding: “I expect lies from the government here. I don’t expect it from other journalists. It’s frankly incredibly disappointing.”
One of the writers of the story, Fox’s Jennifer Griffin, clarified her story Monday evening. Griffin said she had been unaware that a member of the Fox team, a security guard, was given a camera and went on the trip to Gadhafi’s compound.
“I have since learned that Fox did indeed go. I did not know about that earlier today. That is my mistake and I apologize for the error,” Griffin said on Greta Van Susteren’s show.

I would think that knowing that the coalition forces were tomahawking all over Tripoli might give pause to reporters that wittingly or not, their presence might hurt the coalition operation. But that’s just me. Once again, the press overstepping?