OK, that question never got asked but “Coke or Peps”i did. So did “Blackberry or iPhone” and “spicy or mild” and … honestly, why do networks do this?

CNN’s John King decided (or his boss did) to try inject an ice breaker into the debate. The only problem there was no ice to break. The Republicans in this debate were focused on one thing and one thing only, Beating Barack Obama. The most part they obeyed Reagan’s first commandment, or is it the 11th commandment? They did not go after each other.

Nevertheless John King thought it important that he introduce a new segment into presidential debates he called this or that. Not only was it stupid, it was annoying. But it didn’t provide a lot of entertainment on twitter last night.

Editors note: I can’t believe I wasted 30 min. putting this together. Plus here’s the Twitter feed from last night. Very cool. 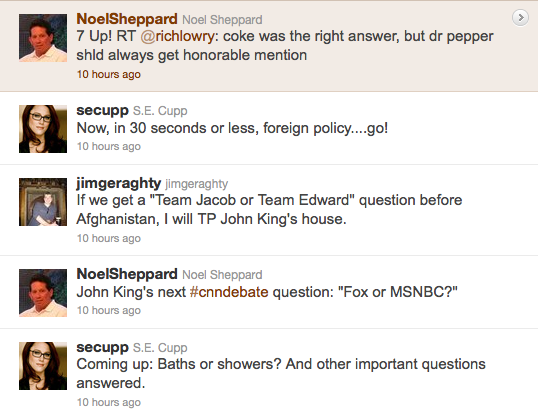 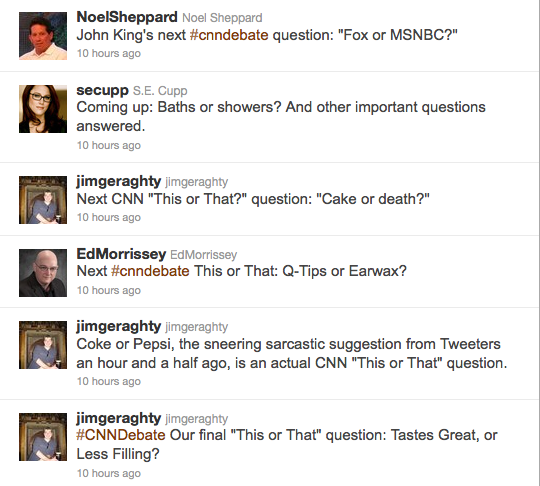 But my favorite is from Jim Geraghty:

Leaving the sick to suffer

CNN/MSNBC take shots at Tea Parties, plus Pelosi and Begala

CNN fact checks Obama Ad that claims Romney responsible for death of steel worker’s wife/ yeah, not so much
13 replies

Obama to America: Hey, did you hear the one about the shovel ready project?

Not just another bump in the road
Scroll to top