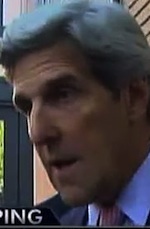 Of course we are. Crazy like a fox … or is that Fox? Over the weekend the Democrats showed one more time, well actually twice, why they will lose in November, how out of touch with the electorate they are, and why the old style politics just won’t work this year, and hopefully never again. Question. Is it really smart to whack the very people who work hard day after day to keep these professional politicians living in the style to which they have become accustomed?

I think I know the answer to that question and my guess is if they keep up these attacks they will soon learn how tough it is to make it in the private sector. First up Bill Clinton takes his whack, Sunday, at the “Wrestling Lady” and the “Witch craft Lady” at a rally in Maine. BTW, the wrestling lady is in a dead heat with Mr. Vietnam.

Yes we are paying attention, which is why the Democrats are on the road to an Armageddon of their own making. As Dr Zero put it so well over the weekend at Hot Air:

The Tea Party is a large and growing movement that rejects the premise that a morally and intellectually superior government should be given endlessly expanding power over every aspect of our lives.  We reject a media-approved narrative that holds the State blameless for its misdeeds, or gives it unlimited credit for its good intentions.  We are competent and compassionate enough to manage our own lives, and address our problems through willing cooperation with our neighbors.

We’re not lost in incoherent anger because we misunderstand a reality only Democrat Party leaders can see clearly.  On the contrary, we realize that an insane level of willing blindness is necessary to ignore the evidence of their abject failure.  You’ve got to be pretty stupid to think Barack Obama’s only problem is that he’s not superhuman enough to fix the “mess George Bush left him” two years ago.  To accept this critique, you would have to believe Americans are so weak that Bush could permanently destroy us in eight years, and Bill Clinton’s last years in office were some kind of golden age.  You would have to believe the effort of defeating Saddam Hussein mortally wounded us.

We don’t blame ourselves for the nation’s problems, Senator Kerry.  We blame you.

Matthews: The Tea Party is just like Muslim Brotherhood-“nutbags”

Smack Down: Connecticut US Senate race a dead heat UPDATE: Let’s get ready...

Congressman Grayson: You want dirty … I’ll give you dirty –...
Scroll to top