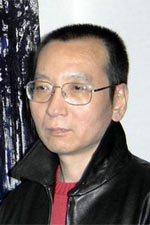 I’ll be completely up-front admitting I do not know much about Liu Xiaobo, the 2010 Nobel Peace Prize winner. He’s is a human rights activist who was arrested, convicted and tossed in a China prison a little more than one year ago for “inciting subversion of state power.”

The classic irony here is that the 2009 Nobel Peace Prize winner – President Barack Hussein Obama – held a very elaborate and lavish state dinner last night for the president of China, who happens to be holding the 2010 winner Lui Xiaobo in prison.

Make your own assumptions…

Thanks to Twitter composer Lash3, with a hat tip to Morrissey at Hot Air. I’m not smart enough to point out these awesome tidbits on my own.

Supposedly, Obama is being pressured into bringing up the conviction and imprisonment of Liu Xiaobo. Pressured?

Obama on health care: I don’t care how you do it just do it

They always tell you who they are, and Obama is no exception.

The plot to destroy American capitalism

Gun talk: Ten rounds in a magazine may not be enough – Firearm realities...