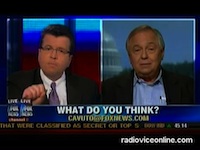 I love Neil now more than ever as he spends a classic 5 minutes taking on the man who took on “Big Tobacco” and Joe Camel and is now taking on Ronald McDonald, John Banzhaf. Banzhaf, a professor at George Washington Law school has made a career out of suing companies that he believes takes advantage of young children by selling them evil products. It is an Ultimate Fighting Champion debate and one worth watching more than once.

The debate starts with a simple question, what are you doing this? They quickly degenerates into a knockdown drag out over personal choice. Between the shouting and the accusations it all boils down to one key point, shouldn’t parents be allowed to make choices without lawyers intervening? The answer is obvious to Neil, and not so much to John. Enjoy my little mobsters.

Not surprisingly the CEO of McDonald’s at the company’s annual meeting yesterday said there was no way the company will retire Ronald McDonald.

Healthy-eating activists say the 48-year-old “spokesclown” hooks kids on junk food and insist the time has come for the burger-pushing mascot to hang up his floppy shoes and clown nose.

Not so fast, says McDonald’s CEO Jim Skinner. Speaking Thursday at the chain’s annual meeting outside Chicago, he said recent newspapers ads calling for Ronald’s ouster had prompted an outpouring of support to his office, with parents and customers asking Skinner “to defend their right to choose.”