Much like Governor Malloy’s “shared sacrifice”, which has turned out to be the state sharing in your sacrifice … the governor’s “First Five” first catch in Cigna sounds like a “big F’n deal”. But it didn’t take me more than 5 minutes on google to discover its a $50 million dollar tax break for a paper move. Good for Cigna, but is it a good deal for the taxpayer?

Cigna will be getting $50 million dollars in tax credits with a promise for more depending on how many jobs they add and the level of new investment. That works out to be about $250,000 in taxpayer cash per job.

Cigna Corp. and state officials confirmed Tuesday a plan for the health giant to tap state incentives to add at least 200 jobs to Connecticut within two years.

Cigna Chairman and CEO David Cordani joined Gov. Dannel P. Malloy in the announcement in Bloomfield, where the Philadelphia-based insurer has its national claims headquarters.

In addition, Cigna said it will make a significant investment in capital improvements and technology infrastructure to upgrade its facilities in Connecticut.

Cigna is the first company to take advantage of Malloy’s new “First Five” initiative, which will provide a series of economic incentives and tax breaks for the first five companies that add 200 jobs in the state.

But a quick check at Philly.com shows, Cigna had established Connecticut as it’s de facto headquarters a year before Malloy ever took office. (emphasis mine)

Connecticut General Insurance Corp. acquired INA in 1982, merging their businesses and their names into Cigna Corp. The headquarters was established in Philadelphia.

In the late 1990s, when a corporate move was considered, then Mayor W. Wilson Goode moved city offices into the company’s space in the former INA building, now the Phoenix condominiums. That allowed Cigna to move into One Liberty Place, and later expand into Two Liberty Place.

In recent years, Cigna’s employment in the city has declined and the company has never been a big player in health insurance locally, where the market is dominated by Independence Blue Cross and Aetna Inc.

Cigna had long operated as a company with two main corporate offices – one here and one in Bloomfield. Until Cordani took over for H. Edward Hanway in January 2010, the focus had been here.

Cordani and the company’s other top officers now live and work in Connecticut. Hanway lived in the Philadelphia suburbs. The highest-ranking executive to remain here will be John M. Murabito, executive vice president of human resources.

Cigna’s health insurance business, which is run out of Cigna’s Connecticut office, accounts for just under two-thirds of Cigna’s $1.35 billion profits, or $861 million.

Cigna realized it could get a windfall in tax breaks simply by changing its letterhead. Good for them. And good for the 200 people it will be hiring. And maybe it will lead to bigger thing down the road. But with the bulk of its profits coming from its health business, and with it’s health business already in Connecticut you have to wonder if these jobs would be coming here with or without the break.

NOTE: Chris Powell at the JI added an important point this morning on Ray’s show too. It’s a sad day when you have to bribe people to come to Connecticut. And may I add, even sadder when the bribe to come here was more like a bribe … to stay.

As I tweeted yesterday afternoon … 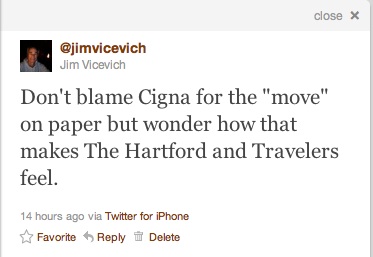 I wonder how many Connecticut CEOs are trying to figure out how thet can get in on the action.

UCONN Hartford Courant poll has Obama up by 21% in Connecticut

Maryland schools have foreign teachers on staff, but Americans available
Scroll to top