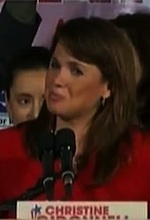 Interestingly enough it’s Coons who could not answer the Constitutional question. But that was put to him by O’Donnell. Still it’s O’Donnell who is being whacked and ridiculed when her challenge to Coons is clearly rhetorical. Audio below. You decide for yourself.I’ll let either the SOS or Steve step in on the constitutional issue, but I have been stunned by the media’s response to this segment of the debate. Stunned on how it’s been twisted into a gaff and stunned at how the MSM has avoided Coons obvious brain freeze. Stunned but not surprised.

The two Delaware Senatorial candidates are debating the issue of intelligent design and evolution. O’Donnell thinks both should be taught if a school system so desires. Coons calls on the first amendment to bolster the position that “creationism” is religious and should not. Set aside the fact that Coons could not distinguish between creationism and intelligent design … O’Donnell asks where in the constitution is the first amendment. The whole radio debate is here at the WDEL site, but I have cut down two bites. The first is O’Donnell’s query on the First Amendment.

I am hoping the SOS will step in here so check back but, “separation of church and state” is not in the constitution and its first mention is in a letter written by Thomas Jefferson. Since that time the first amendment has been used to ban everything from Nativity scenes to prayer at football games … even silent prayer.

Immediately following that question O’Donnell had her feet held to the fire on whether she supported repeal of the 14th, 16th and 17th amendments. She gets the 17th but misses on the 14th and the 16th. I’ll admit, I couldn’t remember the 16th, the power to tax. What got me was the reporter’s gross mis-characterization of the 14th, not to mention, incomplete.

But then as Michelle Malkin notes, and correctly predicted earlier today the main stream media will make barely a mention of the fact that Coons could not remember the freedoms guaranteed in the first amendment, other than “separation of church and state”.

But all you’ll hear from the MSM today is that Christine O’Donnell — correctly — questioned Coons’ claim that the phrase “the separation of church and state” appears in the First Amendment.

Sure enough, MSNBC’s Matthews and CNN’s Wolf Blitzer zeroed in on O’Donnell’s (correct ) question on the First Amendment, calling it a misstep when clearly, as you can hear, is rhetorical. But both completely ignore Coons lack of a first amendment answer. But then, as a lefty, everything after the establishment clause just gets in the way. I will get video up before the show tomorrow and add it here. But a quick example is the MSNBC lefty bias demonstrated here.

Update: Sorry the audio links above were broken. They should be OK now.

What will Grayson do next?

It is your money after all

Facebook: Limbaugh slurs, in … gay slurs, out
Scroll to top