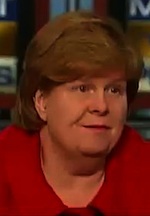 Well, that’s reassuring. But it’s not like we didn’t warn you, over and over and over again. As cheery as she seems, speaking at the National Press Club yesterday she delivered a not so cheery forecast.

Dana Milbank at the Washington Post reports it this way:

It wasn’t the food; it was the entertainment. Christina Romer, chairman of President Obama‘s Council of Economic Advisers, was giving what was billed as her “valedictory” before she returns to teach at Berkeley, and she used the swan song to establish four points, each more unnerving than the last:

She had no idea how bad the economic collapse would be. She still doesn’t understand exactly why it was so bad. The response to the collapse was inadequate. And she doesn’t have much of an idea about how to fix things.

Then in typicalk left fashion, she nails the reasons for the continued economic recession.

“The United States still faces a substantial shortfall in aggregate demand… this shortfall in demand, rather than structural changes in the composition of our output… is the fundamental cause of our continued high unemployment,” Romer told the crowd at the National Press Club in Washington, D.C.

No kidding. No demand because people don’t have money to spend because they either don’t have jobs or they fear for their jobs because this administration still does not believe in stimulating the economy by getting out of the way. Indeed she has called for even more stimulus. Arghhhhh.

We have been telling for a year and a half that government spending cannot and will not stimulate an economy, only business can … and this administration has already painted them as the “evil rich”. You can not artificially stimulate demand … because when the government money runs out, it’s over, or you need to come back for more.

This is Dr Romer just a year and a half ago

Spot on I would say.

UPDATE: Just so you can compare and contrast. Just as Dr Romer told us in the above bite if we just stayed the economic course we would be just fine … here’s the lone remaining economist Austan Goolsbee with something that sounds very familiar from this week.

Maybe he was hoping we would remember what his boss said last year.

Geithner on the economy: it’s going to be hard, harder than anything you’ve ever experienced

Hey, these guys have never even sold a pair of shoes
16 replies

Connecticut should not make pistol permit information available to public

Government will spend whatever the tax system will raise (more like double&...
Scroll to top