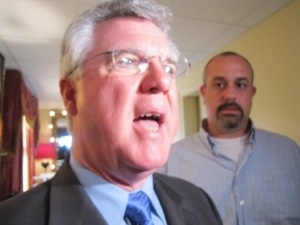 A once seemingly, although not guaranteed, Democrat seat is suddenly in play for Republicans and its all the Democrats doing. The Feds are investigating the questionable handling of campaign contributions to a very liberal Democrat and the State House Speaker Christopher Donovan, who wants to replace very liberal Democrat 5th District Congressman Chris Murphy.

By the way, my definition of very liberal is freely willing to spend your money on someone else. A seat that flipped from long standing Republican Congresswoman Nancy Johnson In 2006.

The rub in this case is that the Feds also seem to be investigating whether contributions bought a a piece of legislation. All links come from CTCAPITOLREPORT. Thumbnail from ctmirror.com.

The finance director for House Speaker Christopher G. Donovan’s congressional campaign was arrested Wednesday by FBI agents and charged with illegally concealing the source of two $10,000 contributions for his campaign, authorities said Thursday.Donovan fired the fundraiser, Robert Braddock Jr., and his campaign manager, Josh Nassi, and hired Tom Swan of the Connecticut Citizen Action Group to take over his campaign just 10 weeks from the Democratic primary on Aug. 14.

“I want to start off and say unequivocally Chris did nothing wrong, and if I thought for one second there was a question about that, I wouldn’t be standing here today,” said Swan, who took a leave of absence as executive director of the Connecticut Citizen Action Group to run the campaign.Swan announced a third firing: Sara Waterfall, the deputy finance director. The campaign wanted “a clean slate” in its fundraising, he said.

The prosecution affidavit filed in U.S. District Court asserts that, in early April, the FBI was secretly recording “CC-1” talking with an undercover agent about disguising the source of contributions — purportedly from some tobacco retailers — to Donovan’s congressional campaign. Three weeks later, the affidavit shows, the FBI had confronted “CC-1” about the conversations and persuaded him to cooperate by allowing them to record his conversations about additional illegal contributions with members of Donovan’s campaign staff.

Though Donovan remains uncharged, this FBI sting may nevertheless bring down a guy who forged his career on keeping behind-the-scenes money out of politics. … Instead, we have a Nixonian Speaker whose top aide says he has chosen not to talk until “the right time.”The right time may have passed him by.

“Chris Donovan should speak for himself whether or not he is guilty of corruption,” Bernier said in a statement released just minutes after the conclusion of the presser. “Hiding behind staff shows a real lack of courage by this candidate. If Chris Donovan cannot answer questions about his own campaign and his own votes, then he has no business representing the people of the 5th District in Congress.”

Despite the media feeding frenzy over the federal investigation into campaign contribution irregularities, Donovan, a Democratic candidate for Congress in the 5th district, showed up as scheduled at the CT Fair Housing Award dinner to receive, interestingly enough, the Edward M. Kennedy Legislative Advocacy Award. And while he may have been down by that point of the day, peeps there gave him a standing ovation