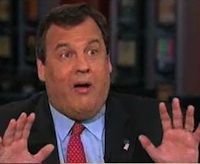 Fresh off his “huggable” performance on Meet The Press, Christie was in rare form this morning on the Morning Joe. Maybe rare is the wrong term? How about typically blunt form. Joe Scarborough brings up that he had just spent some time with Mika talking to CT Governor Dan Malloy and Christie was off and running … and it all began with a laugh, as in who’s laughing now.

This is a feud that began months ago with Malloy, calling Christie “bombastic”. Christie countered with telling Malloy to read the “owners manual”, and on it went. So with Christie landing major concessions from public sector workers, and Malloy getting the Rockefeller salute from Connecticut unions on concessions, well, Christie jus couldn’t resist.

Make sure you stay for Mika’s question on “Will you raise taxes?” and “Why not?” Too much.

Christie can crow, given his victory in his “liberal” legislature to get a new public employee compensation package last week. This on top of a property tax cap, with changes in education coming soon.

Meanwhile his Connecticut counterpart’s conciliatory approach has netted Malloy a no deal from labor, prospects of layoffs and/or higher property taxes.

Maybe its me … but after Malloy’s tough stance on … umm … New Jersey’s Governor, Christie has a right to thump his chest.

Ensign to Matthews: We put our Navy SEALs through worse

“It’s not your money” Cavuto video

Michelle for President? No, not that Michelle (gulp!)

A piece of the Casey Anthony trial
Scroll to top