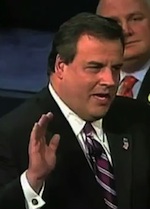 I’ll take one of these please. Another New Jersey teacher tries to take on Chris Christie and learns a thing or two about decorum. Watch the video while you listen and you tell me, is this really a teacher or a 1st grade student? Perhaps she’s been around kids a little too long.It starts out, I thought, civilly, and then her question quickly turns into a condemnation of Governor Christie. The subject is the pay freeze that teachers were asked to take for one year and a 1.5% contribution to health care. The teacher drones on about struggling to pay bills and pay for books and what a mean man Chris Christie is.

Watch as Chris Christie listens patiently and then gets tough when the teachers begins to roll her head and apparently her eyes and … well … Christie had had enough. Thanks to AP at Hot Air for picking this up.

AP’s take is actually a very good one. He points out, correctly I think, that there’s a lot of RINO in Christie, but his no nonsense attitude gives him the lattitude to be less than a “Tea Party” model.

Center-right Republicans aren’t “supposed” to be fierce and pugnacious; they’re supposed to be milquetoasts, hesitant about which way to go on issues and willing to broker “six of one, half a dozen of the other” compromises to extricate themselves. This is a guy who, partly through force of personality, will end up making moderate stances on things like immigration more respectable to base voters.

Am I to enamored with this guy? Ummmm, nope.

UPDATE: At risk of turning the blog into the Chris Christie home page. AP also points out another video from the Republican Governor’s Association about the resurrection of the Republican Party, featuring ….. ta da … Chris Christie! It’s in the featured video section on the right. It’s great.

Why is Christie bringing up the Gingrich 1997 ethics charges?

Chris Christie to Republicans … put up or shut up
9 replies

Biden to Bush: You deserve a lot of credit Mr President
Scroll to top