I’m no international banking financial guru, but this can not be a good sign. The flip side is that other countries – including Japan and the UK – seem to be buying, but at what price?

Hat tip to Gateway Pundit. Jim Hoft does not seem to sleep much … I need to sleep. Hoft points us to an article by Tyler Durden at ZeroHedge. 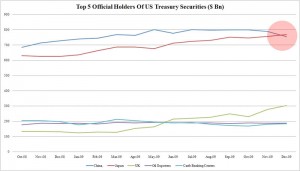 Gradually we are getting confirmation that Chinese “posturing” about offloading US debt is all too real. The most recent TIC data confirmed the Treasury’s greatest nightmare: China is now dumping US bonds. In December China sold $34.2 billion of debt ($38.8 billion in Bills sold offset by $4.6 billion in Bonds purchased), lowering its total holdings $755.4 billion, the lowest since February 2009, and for the first time in many years relinquishing the top US debt holder spot to Japan, which bought $11.5 billion (mostly in Bonds, selling $1.4 billion Bills) bringing its total to $768.8 billion. Also, very oddly, the surge in UK holding continues, providing yet another clue as to the identity if the “direct bidder” – as we first assumed, these are merely UK centers transacting primarily on behalf of China as well as hedge funds, which are accumulating US debt under the radar. UK holdings increased from $230.7 billion to $302.5 billion in December: a stunning $70 billion increase in a two month span. Yet, with the identity of the UK-based buyers a secret, it really could be anyone… Anyone with very deep pockets.

The chart that goes along with the story is interesting, since I have not seen it laid out that way before. Click on it to enlarge.

The government said Tuesday that foreign demand for U.S. Treasury securities fell by the largest amount on record in December with China reducing its holdings by $34.2 billion.

The reductions in holdings, if they continue, could force the government to make higher interest payments at a time that it is running record federal deficits.

The Treasury Department reported that foreign holdings of U.S. Treasury securities fell by $53 billion in December, surpassing the previous record of a $44.5 billion drop in April 2009.

The big drop in China’s holdings meant that it lost the top spot in terms of foreign ownership of U.S. Treasuries, dropping to second place behind Japan. …

The Obama administration on Feb. 1 released a new budget plan which projects that the deficit for this year will total a record $1.56 trillion, surpassing last year’s record of $1.4 trillion deficit. The trillion-dollar-plus deficit have been caused by a deep recession, which has reduced government tax receipts, and the massive spending that has been undertaken to jump-start the economy and stabilize the financial system.

Uh, no. The deficit may have partially increased due to what AP now officially calls the Great Recession, but what about all of the spending? Like maybe $787 billion in pork?

Classic: Who holds the 2010 Nobel Peace Prize winner in prison?

Lights Out in Paris – Olympic Torch Stumbles Along

Sept. 11 an inside job versus Americans who think stimulus workedEvan Bayh – Congress has not created one new job
Scroll to top