From Hot Air … I think this picture says it all. WHPS Gibbs says he’s seen a lot of heat on both sides … but the thugery is only on one side. From the Denver Post today.

The well dressed elderly woman assaulted by HopenChangy woman (it’s on her T-Shirt) who won’t give her name to the Post. Of course not. My favorite part … the Obama poster in the background. Change we can believe in … or else! Click to enlarge. 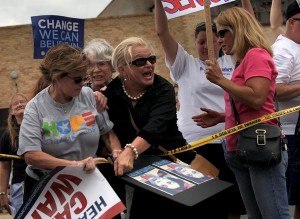 Oh, and notice which side has the preprinted signs. Astro-Turf!

And while we are at it … let’s revisit, shall we, the SEIU union thugs who beat up the young African American conservative. It turns out … they also took some shots at a woman in the crowd taping the whole thing. Caution … the union member uses less than clean language.

And while we are at it … here’s video from today’s rally in St Louis in support of the young man who was beaten by these union thugs. Hot Air has nice commentary here.

And your opinion on Dred Scott v. Sandford is?

The “Birthers” get a big push from … Chris Matthews? UPDATE: More Matthews UPDATE 2: I believe
3 replies

Dodd cleared … then spanked Change we can believe in – Part 2 – Update: marching orders
Scroll to top