From the Associated Press – a willing accomplice – we have a story concerning the Census Bureau’s concern about potential dangers to its workers, including anti-government sentiment and car accidents.

Of course, the story provides no examples of anti-government sentiment at all, rather they refer to the six Census workers who were killed in automobile accidents and one who was bitten by a dog during the past week.

It’s tragic that anyone dies in an automobile accident, but that happens to employees heading to and from work on a daily basis. But the AP and Census Bureau officials had to subtly refer to those violent TEA Party mobsters hiding within the homes, condos, apartments and 55-and-over developments across the nation.

From the first paragraph of the story, with my emphasis in bold.

The Census Bureau said Monday it is being watchful about potential dangers to its workers – ranging from anti-government sentiment to everyday accidents – after six employees died in auto incidents in the past week.

Remember the suicide of Bill Sparkman? He staged his own death to make it look like he was a targeted government census worker just trying to do his job.

TEA Party members are not anti-government purists, rather they are reading and learning more about the United States Constitution on a daily basis and realizing the genius of the Founding Fathers. They just want the federal government to simply stick to their Constitutionally mandated powers and leave the rest to the states and the people. 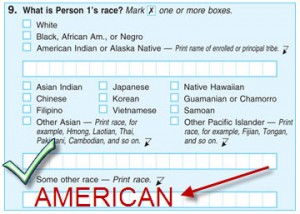 To make myself clear, I have no issue with the Constitutional requirement to count heads in our country once a decade. It certainly should not take so long or cost so much to simply figure out how many people are in the United States, but I have no issue with it at all.

A Parade piece from February indicates the 2010 Census will cost upwards of $14 billion, about double what it cost in 2000.

Fourteen billion dollars. That works out to $45 per person just to count everyone!

If you have sent in your Census form – with question 9 indicating you are an American – great. If you have not done so, please send it in. If someone shows up at your door either don’t answer or be nice to the person who’s just doing their job.

The census plan – proving bureaucracy does not work (Update)

Census marketing – Get YOUR fair share from the federal government!
3 replies