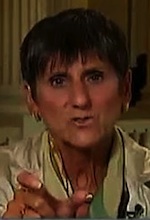 In the old days this would be called a lesson in “double talk.” Before the age of information the main stream media would let DeLauro get away with kind of crap. But alas …. we will not. Neil asks a simple question … does the new infrastructure bank require that anyone who borrows from it use union labor on their projects. Bueller? Bueller?

If you’re no familiar with the bill, no worries, not too many other people are either. This has garnered almost no news coverage. It’s a revival of a similar bill proposed by Congressswoman Rosa DeLauro and Senator Chuck Hagel (remember him?) 3 years ago. Revived by Barry O:

Central to the plan is the president’s call for an “infrastructure bank,” which would be run by the government but would pool tax dollars with private investment, the White House says. …

Indeed, some leading proponents of such a bank — including Gov. Arnold Schwarzenegger, Republican of California; Gov. Ed Rendell, Democrat of Pennsylvania; and Michael R. Bloomberg, the independent mayor of New York — would like to see it finance a broader range of projects, including water and clean-energy projects. They say such a bank would spur innovation by allowing a panel of experts to approve projects on merit, rather than having lawmakers simply steer transportation money back home.

But it also includes a provision that would force projects to, essentially, hire union labor. I think. I don’t know. And neither does Neil. In fact Cavuto tried, over and over again, to get her to answer the question and DeLauro just babbles about leverage and windmills or something. Worth the look for its entertainment value alone. Bueller?

Davis-Bacon by the way is an ancient outdated law from the 30’s that requires a government bid project pay workers a prevailing wage and benefits. Union!

Oh, now might be a nice time to play this one.

Obama one term President? Hillary in the on-deck circle?

Rep. Holmes Norton: I’m surprised you have not donated to me yet –...