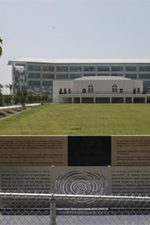 Andrew Coulson at the Cato Institute reviewed the 2009 version of the Digest of Education Statistics (PDF, 7 MB or Web version), with a tremendous amount of data that I just do not have time to analyze. I’m certain the U.S. Department of Education’s National Center for Education Statistics spends lots of resources putting these reports together, and since I represent the conservative point of view, I’m going with Coulson’s overview concerning the increased funding and increased number of positions as compared to student performance.

You’re welcome to add links to articles from the progressive/liberal perspective in the comments section if those articles pull data from the same Department of Education report.

His argument is rather simple, we’re throwing a lot of resources at education performance initiatives and the return on investment is not present at all. 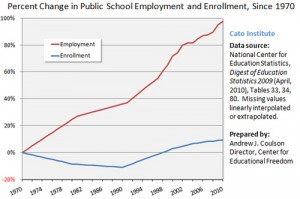 Teachers unions, the Obama administration, and most Democrats in Congress want to spend another $23 billion that we don’t have to shore up public school employment. If we don’t go along, they tell us, it’ll be a “catastrophe” for American education. With fewer teachers our kids will supposedly learn less, further crippling our already wounded economy.

They couldn’t be more wrong.

Over the past forty years, public school employment has risen 10 times faster than enrollment (see chart). There are only 9 percent more students today, but nearly twice as many public school employees. To prove that rolling back this relentless hiring spree by a few years would hurt student achievement, you’d have to show that all those new employees raised achievement in the first place. That would be hard to do… because it never happened.

Losing a job is a terrible experience, but the school hiring binge of the past four decades has been entirely disconnected from enrollment levels and unaccompanied by educational improvement. Foolish public officials and self-serving, empire building teachers’ unions have created millions of unproductive jobs that were never justified in the first place and that have been a terrible drain on the U.S. economy.

As shown, his first chart pulls information from Table 33, 34 and 80 and extrapolates the data into one chart, something I’ve done before myself after reviewing government data.

As an example, Table 33 shows enrollment in elementary and secondary schools went from 45.6 million in 1970 to 49.3 million in 2007, an 8.1 percent increase. During this time, total instructional staff (supervisors, principals, teachers…) when from 2.3 million to 4.2 million – an 82.6 percent increase. These are literally back of the napkin figures, so Coulson’s figures certainly had more thought and research involved.

The featured image for this post is the front of the Robert F. Kennedy Visual and Performance Arts High School in Los Angeles. This is one of the community schools recently completed at a total cost of more than $575 million. It’s been a hot topic in the alternate media here, here, here and here.

Are you up on your civics? Take the quiz!

Obama one term President? Hillary in the on-deck circle?
Scroll to top