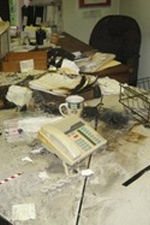 I agree with Jim Hoft … the guy – if the story is accurate – is crying out for help, but there are a couple of things to point out in this still-developing story concerning the 50 year old white male who was arrested for breaking a window and tossing in some sort of weak firebomb into Russ Carnahan’s (D-Mo.) campaign office.

First off. The guy being referenced is not a TEA Party member, rather it seems the guy was a Carnahan supporter and volunteer who was ticked off that he was not getting paid for his efforts.

I’m not saying there have been no incidents of violence by TEA Party members – add them with a link in the comments if you wish – but this type of situation seems to happen more and more often. Violence leads to automatic “blame a TEA Party member” story.

This particular act (arson) – which luckily did not hurt anyone – took place on Aug. 17. Someone was arrested the next day and then released on Aug. 19. From the STLToday website.

A man taken into custody Tuesday in connection with a firebombing at the campaign office of U.S. Rep. Russ Carnahan has been released. Police said Wednesday that the suspect, 50, whose name was not made public, was let go after the prosecutor’s office took the case “under advisement” for possible charges later. Police can only hold a suspect for up to 24 hours without formal charges. The fire at Carnahan’s campaign headquarters on Chippewa Street began about 2:20 a.m. Tuesday. A flaming projectile was apparently thrown through a back window, causing minor damage — mostly charred paperwork — in a room the campaign uses for its finance operation. While Carnahan is locked in a tough re-election battle, police offered no indication that politics could be a motive. Carnahan’s Republican opponent, Ed Martin, issued a statement condemning the attack.

Jim Hoft does not provide a source for his information, but writes the following. Note the guy seems to have been arrested … is that information – his name – public? Hey Jim, I know this story has been developing for the last few hours, but where is your information coming from?

The suspect was reportedly a disgruntled progressive activist employed by Russ Carnahan. An unnamed source familiar with the case released the information. Suspect Chris Powers reportedly was upset because he did not get paid so he firebombed the Carnahan finance offices at 2 in the morning.

What a complete shock.

This is what Chad Garrison wrote in a blog commentary piece in the Riverfront Times on Wednesday, Aug. 18 while the guy was in custody.

Police aren’t releasing the man’s name until charges are officially filed. No motive was given for the attack, though one could suspect that the perpetrator is not a fan of the congressman. Given what we know of him — 50, white, angry — he certainly fits the demographics of a Tea Party member.

Perhaps, he joined his fellow “patriots” earlier this year when they burned Carnahan’s photo in effigy or placed a coffin on the sidewalk outside his home. On second thought, maybe he’s not a Tea Party member. Firebombing your opponent’s office seems a little too, um, sane for that group.

If it turns out this Carnahan volunteer committed this crime and the Carnahan campaign elected not to press charges and St. Louis law enforcement elected not to arrest the guy for one reason or another, who should be stepping out an apologizing for ratcheting up the rhetoric?

Second point. Carnahan’s campaign was quiet about the attack. They did not blame TEA Party right-wing whack-jobs like some bloggers and commentators did in St. Louis. But Mark Schnyder at KMOV.com notes…

[W]hen I talked to a [Carnahan] campaign spokesperson she refused to comment on anything beyond what police already told us.  I tried to ask “What do you make of this?”… “How are workers and volunteers inside dealing with the fact their office was attacked?”… but Angela Guyadeen would have none of it.  She wouldn’t even tell me why she wouldn’t answer these simple questions.

Meantime, opponent Ed Martin [Running as a Republican for US House, Mo. 3rd District] wasted no time condemning the action on his campaign website.  He agreed to an interview outside his headquarters, too.  He told me his campaign workers are careful.  They’re off busy Hampton Avenue where he says people drive by yelling nice things and not so nice things sometimes.  He’s had his big sign  hit by a Dairy Queen Blizzard, but other than that nothing headline-grabbing like a burning object being tossed inside.

He says there are lots of things to disagree on as far as the campaigns are concerned, but he says there’s no place for violence.

Weird how the Carnahan campaign couldn’t or wouldn’t put similar words together.

I’ve heard it’s a blogger with democratic ties who coincidentally wasn’t blogging during the 20 hours or so a 50-year old man was in custody for the crime.

Police couldn’t charge him with arson because the circuit attorney says there wasn’t enough evidence.

Exit question: Does Carnahan’s campaign know one of their volunteers was arrested for the attack, and, have they allowed commentators and bloggers in St. Louis drum up the story that it “had to be” one of those TEA Party nuts?

Will some one in the St. Louis media as the question of the Carnahan campaign?

Malkin has more, and Hoft’s post has been cross-posted at Big Government.

Robert Reich to the “rich”: We don’t need your stinking saving...