I wish this were a joke … and it may very well turn out to be … but columnist Warner Todd Huston wrote about this yesterday and I was just sitting there in stunned disbelief. And of course AP at H/A has a pretty good take on this too. Update (Steve) below the fold…)

Scroll to the bottom of this post for an update.

In issue number 602 of Captain America, a new story line has begun called “Two Americas.” In it the current Captain (there have been a few of them, apparently) is on the trail of a faux Captain America that is mentally deranged and getting chummy with some white supremacist, anti-government, survivalists types going by the name of “the Watchdogs.” While investigating this subversive group, Captain America and his partner The Falcon — a black super hero — have decided to try and infiltrate the secretive organization. 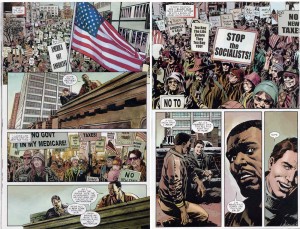 Well that’s fine with me, how about you? Subersive, racist, domestic terrorists. Bad. Thank you Capatin America. But wait, there’s more.

Update (Steve): Click on the image to see a scan full size. If you can’t read it, click here and magnify the image in your browser.

In preparation for the infiltration, Marvel Comics depicts the two super heroes out of costume and observing from a rooftop a street filled with what can only be described as a Tea Party protest. The scene shows crowds of people in city streets carrying signs that say, “stop the socialists,” “tea bag libs before they tea bag you,” and “no to new taxes.” Naturally, the people in these crowds are depicted as being filled with nothing but white folks.

The black character asks the out of costume Captain, “What the hell is this?” And follows that with, “looks like some kind of anti-tax protest.” The Falcon character then snidely tells his partner the Captain, “So I guess this whole ‘hate the government’ vibe around here isn’t limited to the Watchdogs.”

This discussion culminates in The Falcon wondering how a black man would do such a thing. “I don’t exactly see a black man from Harlem fitting in with a bunch of angry white folks,” he tells the incognito Captain America.

Thank goodness Captain America is here to save the day. Those Grandmas can be pretty feisty. We can only hope Superman lends a hand. Read the whole thing please.

Update: OK – Jim just discussed this story on the big show. One of the signs displayed in the crowd referred to the frequently-used TEA Party jab we’re all now familiar with. TEA Party organizers were not happy and complained. FoxNews.com reports the reference on the sign will be removed.

A “tea bag” reference in a recent Captain America comic book that has angered the Tea Party movement will be removed by Marvel Comics in future editions, the story’s writer told FoxNews.com. 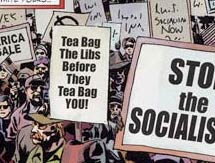 In issue No. 602 of Captain America, “Two Americas, Part One,” the title hero and The Falcon, a black superhero from New York City, stumble upon a protest rally in Boise, Idaho. They see scores of protesters carrying signs that say “Stop the Socialists!” and “Tea Bag The Libs Before They Tea Bag YOU!”

Captain America says the protest appears to be an “anti-tax thing,” and The Falcon jokes that he likely would not be welcomed into the crowd of “angry white folks.”

Ed Brubaker, who wrote the story, told FoxNews.com he did not write the “Tea Bag The Libs Before They Tea Bag YOU!” sign shown in the edition, insisting that the words were added by someone in “lettering or production” just before being shipped to the printer. It will be changed in subsequent editions, he said.

“I don’t know who did it, probably someone who thought it was funny,” Brubaker wrote in an e-mail. “I didn’t think so, personally. That’s the sign being changed to something more generic for the trade reprint, because I and my editor were both shocked to see it.”

Newt … Tea Party The Real Deal, Republicans will take back the House in 2010
7 replies