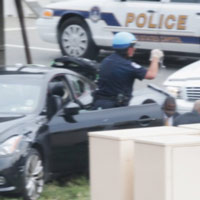 Since all of the media outlets are speculating and interviewing “eyewitnesses” who heard shots, I figure I can speculate too. I’ll update this post as I have time, if I have time. 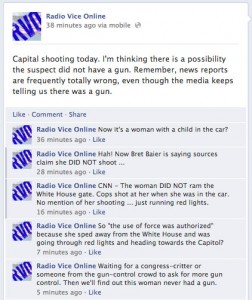 Note: The original version of this post was written and published starting at 3:50 p.m. ET, with updates noted.

I’ll update this post [stopped updating at 4:50 p.m. ET], but at 3:12 p.m. ET when everyone was saying there was a shooter, I posted over on Facebook that I was thinking there might not be a shooter. Pure speculation, but I elected to bet the news reports of a shooter was totally wrong. Everyone in the media was saying this person got out of the car and started shooting. I made the assumption they got it totally wrong. Time will tell if my guess is right.

Over time, I watched news reports start to mention that “sources” were saying she was not shooting.

We first were told someone tried to “ram the gate” at the White House. That might not at all be the case either.

Then I started to wonder about how the politicians and gun control crowd was reacting on the “news” reports. Since they heard phrases like “obviously the person was shooting” I’m wondering if they felt they had the go-ahead to start posting about gun control again. Did not see any knee-jerk reactions from politicians yet, but you’ll find tons of comments in social media and in comment threads saying stuff like “maybe those in congress who didn’t vote for reasonable gun-control will have second thoughts.”

4:16 p.m. ET: She may have come from Connecticut. The black car in this photo definitely has a Connecticut plate. Maybe 323 PMS? Maybe 323 NIS? “It’s an Infinity Q60 Coupe in what looks to be Black Obsidian in color Wolf [Blitzer]. The standard Journey model starts at $40.400 USD. “ 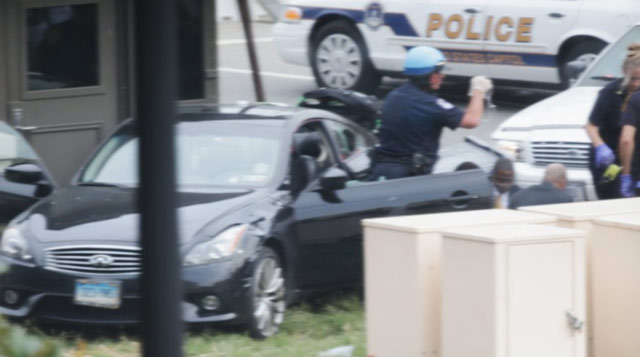 4:20 p.m. ET: I’m finding it hard to believe the black car above did this much damage to the police car. I hope the cop is OK. (Reports now say this cop car hit one of the barricades at high speed. Makes sense.) 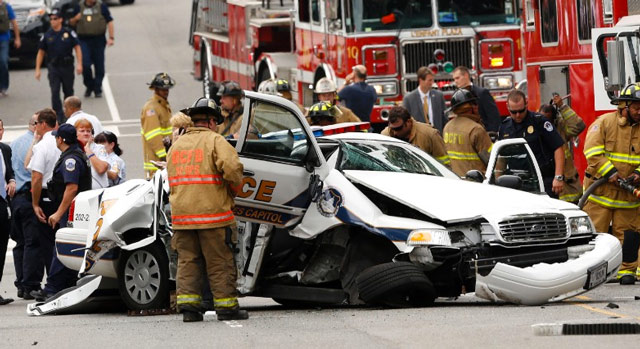 4:35 p.m. ET: CNN showing video (now embedded below) of what seems to be the first part of the event. This driver was NOT SHOOTING or out of the car. That said, driving at law enforcement like that certainly can be use of a dangerous weapon.

4:43 p.m. ET: Unless the back windows were super-tinted, [Update – they are not, they were clear.] I’m having a tough time understanding how those cops did not know their was a child in the car. They started shooting after she got about 20 yards away or so. To clarify: LEOs did not shoot until she was driving away, but she most likely was heading towards more officers who probably did not know there was a kid in the car. (The cops who were very close to the car did not seem to be shooting.) Very possible at the second area where it all ended, cops did not know there were kids in the car either.

The young toddler (maybe 2 to 4-years-old?) being rushed away by police seems to be a black female.

4:45 p.m. ET: I’m done with updates but you’re welcome to add information in the comments section. My original intention when I posted my Facebook post was an “exercise in media journalism” for me. I had a good hunch the “shooter” was not a shooter after all. I even had a hunch she never had a gun. Keep that in mind I told a few people “I bet an AR-15 “assault” rifle was not used” at the Navy Yard shooting last month as that story was breaking. I did not publish my speculation. This time, I published, and it seems as though I was right.

Don’t trust or believe the media when it comes to breaking news like this. You can almost figure they are totally wrong with their speculation, and you’d be right more than half the time. We have to ask, who were the witnesses and sources who were telling the great media machine this person was shooting?

Last comment. With the flash news cycles that are all the rage, can you imagine how bad the information coming from media will be if something really bad happens? Maybe I’ll go watch an episode or two of Doomsday Preppers.

Arizona principal asks cop not to wear uniform and gun when picking up daug...