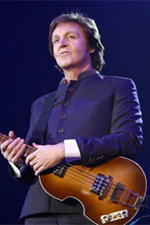 He has every right to say what he wants, but why did Paul McCartney feel the need to announce – at a ceremony where he received the Library of Congress Gershwin Prize for Song – he was happy Bush was out of the White House?

You, Sir Paul, demonstrated he can have zero class at times. From the Washington Post…

They shouldn’t cut a note from McCartney’s closing suite. “I hope the president will forgive me if I sing this song,” he quipped after Obama presented him with the Gershwin, and began crooning “Michelle.” During the I-love-you-I-love-you-I-lovvvve-you, the president leaned over to sing into the first lady’s ear.

When it was over, McCartney joked under his breath, “I’m gonna be the first guy to get punched out by a president.”

Then, “Eleanor Rigby,” “Let It Be” and “Hey Jude” — followed by what felt like endless applause.

A sweet moment, but McCartney topped it off with a bite. After thanking the Library of Congress one last time, he let it rip: “After the last eight years, it’s good to have a president that knows what a library is.“

What kind of stupid quip is that? Doug Powers over at Michelle Malkin’s blog notes…

I’d rather have a president who knows what a terrorist is and seems actively aware that the friggin’ Gulf of Mexico is about to be 10W-30 for the next decade, but hey, that’s just me. If you’re more comfortable with the genius who thinks there are 58 states, tried to enter the White House through a window and can’t go to the john without a teleprompter, that’s your right, Sir Paul.

Shall we also go into facts concerning the current president’s lack of experience managing, well, anything other than community activists who don’t get paid or have health benefits?

Maybe we should take a look at Obama’s college transcripts to see if he could find the library himself? Oh, that’s right, Obama says he spent a tremendous amount of time in the library during his college days, but what about the results of those efforts? We’ve got no grades or transcripts for Obama from Columbia or Harvard Law. Any papers he’s written? Nope.

Of course I forgot … it’s not the actual results, it’s the intentions that count.

Note to future award recipients: When you step up and are honored by the United States of America for a lifetime achievement award, it’s not appropriate to act like an ass even when in front of friends. Be humble.

Imagine just for a moment if a vocally conservative artist was up for an award to be handed out by the president and he or she said something derogatory concerning the president. Oh, the humanity…

Maybe I’m a bit overboard on this, but I’m just so done with all of the “stupid” remarks about President Bush since they were pretty much all proven wrong.