Perfectly within his rights and I don’t blame him one bit. Canada proposed ripping open his chest and breaking multiple bones, where a Miami expert was able to complete the same surgery in a less evasive manner using an incision under his arm.

I’ve also heard the same story when a friend needed work on his ticker. His heart attack experience was in the states where he was stabilized and he had the option to go home and get ripped open or have a less evasive procedure here in the states. He stuck around.

I could throw around the “where will the Canadians go for their heart surgery” mantra, but what I want to point out is the different level of care in Canada, specifically defined by a patients ability to pay. If you’ve got the funds, and a condo in Sarasota where you can rest up for a month before heading home, you’re good to go.

An unapologetic Danny Williams [Premier of the Canadian province of Newfoundland and Labrador] says he was aware his trip to the United States for heart surgery earlier this month would spark outcry, but he concluded his personal health trumped any public fallout over the controversial decision.

In an interview with The Canadian Press, Williams said he went to Miami to have a “minimally invasive” surgery for an ailment first detected nearly a year ago, based on the advice of his doctors.

“This was my heart, my choice and my health,” Williams said late Monday from his condominium in Sarasota, Fla.

“I did not sign away my right to get the best possible health care for myself when I entered politics.”

The 60-year-old Williams said doctors detected a heart murmur last spring and told him that one of his heart valves wasn’t closing properly, creating a leakage.

Damned if he goes, damned if he stays. He notes he would have been criticized for getting the surgery at home. My emphasis in bold.

“I would’ve been criticized if I had stayed in Canada and had been perceived as jumping a line or a wait list. … I accept that. That’s public life,” he said. 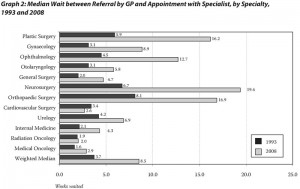 Gee, I wonder why there are not enough doctors?

The Fraser Institute in Canada released a 2008 report called Waiting Your Turn. After committing more than $6 billion to improve wait times, it’s getting worse in Canada. Maybe they will say the wait times would have been worse if they didn’t spend $6 billion! (Get that?)

Correction (Feb. 24) – Spelling of premier fixed in the headline.

Democrat Senators: Wait, there is a medical device tax in Obamacare?

US Senate committee to release Climategate reportGov. Schwarzenegger tells Greta, the tea party will be gone in a twinkle
Scroll to top