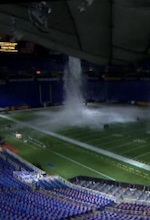 By now, if you have been following my tweets (@jimvicevich) you are up to date on the Giants Vikings game. The 15 inches of snow in Minneapolis first caused the game to be postponed to Monday night at 7:00 PM Eastern Time and now moved … to Detroit. But if you want to see the game in Connecticut you have to speak up. Here’s the latest.

The stadium roof in Minny collapsed at 5am this morning forcing the NFL to look for another venue.

UPDATE: There’s video below, but here’s a pic if you can’t get video. 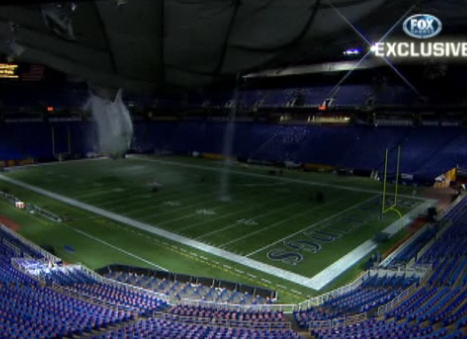 In the mix were stadiums in Indianapolis and Detroit, with the NFL deciding on Detroit. Why, I have no idea. If you’re gunna move it, put it in Miami or Jacksonville, both neutral sites. Miami, with its thousands of New York and Midwest transplants seemed ideal, but I understand it never came up.

The game will be carried in New York on Fox 5 but NFL rules prohibit the game from being carried outside the teams territory, which means no TV for New England, one of the Giants biggest fan base areas.

Rich Graziano, CEO of the Courant and Fox 61,  sent me an e-mail this morning saying he has petitioned the NFL for an exception, so stay tuned. BUT, we could use your help. If you want the Giants on TV in Connecticut you have to let the NFL know.

Here’s the NFL’s e-mail contact page … www.nfl.com/contact-us, or you can call them at 202-450-2000 and let them know Connecticut is part of their territory and you want Fox 61 to be granted an exception.

In the meantime … here’s video of the roof collapsing this morning. Hat Tip Hot Air. Remarkable!

Q. What do tin, tantalum, tungsten and gold have in common?

Your money and high-speed rail
Scroll to top