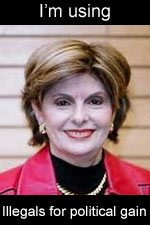 Yeah sure, it’s still September, but why not start early? Infamous lawyer Gloria Allred – a big liberal Democrat – has used her illegal alien client in a political attack against Meg Whitman, currently running for governor in California as a Republican.

I can almost envision the first conversation between Allred and her new client. You worked for Meg Whitman for nine years? Oh, you’re an illegal alien?! Great, come on in … I can use you.

Update: Michelle Malkin watched the press conferences today and I have a quote from her at the bottom of this post. Looks to be he says, she says, she says… but who the heck knows? If Whitman knew, she’s going to take a huge hit for it. That said, she’d still be a much better governor than Jerry Brown.

Update 2: Scroll down for a snippet from AP at Hot Air.

Now I admit, I don’t know too much about Meg Whitman or the California race for governor, but I can certainly smell rotten apples, and this smells rotten to the core. Plenty of other bloggers including AP at Hot Air, Jim Hoft at Gateway Pundit and Michelle Malkin have been writing as I watched the story unfold late yesterday afternoon.

I held off last night, as I was trying to figure out why Allred would march Nilranda (Nicky) Diaz out in front of the media and announce Diaz was an illegal alien. Of course, it was all tied to a political attack and it’s quite clear Allred doesn’t give a hoot about her client. Is there some sort of ethics issue to resolve here?

If you committed a misdemeanor or even a felony in the past that you were not arrested for, and you told your lawyer about the crime, you would think – due to lawyer/client privilege – the lawyer could not go to law enforcement to report the crime. (I’m really not 100 percent sure how that works.)

Yet, Gloria Allred goes directly to the media and announces her client is an illegal alien who worked for Meg Whitman. Of course since the original attack yesterday, we find out that Diaz completed an application in May of 2000 that indicated she was legally allowed to work in the United States, she had a car and insurance, she had a drivers license from the State of California, and she had a Social Security card and number.

So, has California been providing drivers licenses to illegal aliens for more than 10 years? Remember, back in 2000 there was no easy way for a small business or individual to verify someone was legal to work in the USA. Come to think of it, it’s not to easy to do that now either. Anyway…

Diaz is a criminal. She was working in the country illegally but let’s not forget probable identity theft too shall we? Whose SSN was that anyway? Diaz is being abused by Allred, much more than Whitman ever did as at least Diaz was being paid upwards of $46,000 per year working for Whitman.

Of course, Allred says she has documented proof Whitman knew Diaz was an illegal alien. Most likely, that document is one of two sent by the Social Security Administration notifying Whitman there was a “no match” on the SSN provided by Whitman. Note Whitman was properly paying withholding, FICA and Medicare taxes tied to Diaz’s salary.

But get this… Diaz had direct access to mail sent to Whitman for years. Diaz – as an illegal alien criminal – had a clear, vested interested in blocking the letters from the Social Security Administration from getting to her employer.

Dirty pool this one is. But what do you expect?

Sweetness & Light also has put this in perspective, and notes how the media is spinning this story in an attempt to gain some traction for either the Democrat candidate or website page hits.

The Whitman household, contrary to the candidate’s flat denials, did in fact receive the red-flag letter six years ago. Contrary to Whitman campaign supporters’ insinuations that the maid stole the letter, she was apparently in legal, legitimate possession of it. Whitman’s husband gave it to her and passed the buck.

Will the campaign deny that Whitman’s husband’s handwriting is the real deal? Will they absolve Whitman by putting sole responsibility for the matter in her husband’s hands? Will they continue to harp on the maid’s fraudulent representation of her status in 2000, instead of dealing with the red flags [not just the no-match letter(s), but also the fact that Diaz-Santillan was banned from traveling back to Mexico] from 2003 onward?

Their defense, as I understand it, is to argue that this “red-flag no-match letter” from SSA didn’t actually raise any red flags about immigration. (As you can see above, the letter explicitly states that it “makes no statement about your employee’s immigration status.”) When you read it carefully, all it says is that there’s some recordkeeping discrepancy related to Diaz’s W-2, which could mean any number of things; her lawyer points out that Diaz acknowledged on page two of the document that she goes by two different names, which Whitman’s husband might have believed was the true cause of the mix-up.

Lawyer Allred throws illegal alien client under the bus for $6,210

Teachers on both coasts paid to do nothing

Confirmed again – Schwarzenegger not a conservative

California is in the news again…
24 replies

Your Krauthammer Moment: No tax cuts, no budget, they’re incompetent
Scroll to top