I need a margarita Jack & Coke after reading this. Four students at Live Oak High School in Morgan Hill, Calif. were sent home from school after refusing to remove bandannas and T-shirts on May 5 – Cinco de Mayo – since their apparel was incendiary.

From KTUV with hat tips to Michelle Malkin and Jim Hoft.

School officials at Live Oak High in Morgan Hill told the students they had to go home if they wouldn’t turn the shirts inside out.

One of the students said it appeared school administrators were worried the patriotic shirts could trigger fights.

Some Mexican-American students KTVU spoke with said they thought wearing red, white and blue on Cinco de Mayo was disrespectful.

“It’s just kinda disrespectful that they would do that on this day,” said student Victoria Wright. “I mean, we don’t go around on 4th of July wearing red white and green and saying ‘Viva Mexico,’ because that’s disrespectful.”

One student showed us a Mexican flag belt buckle he wore Wednesday. He disagreed with the way the American flag-wearing kids were treated.

“I think it was kind of going overboard with the suspension, but it’s also kind of disrespectful because it’s our day,” said student Sal Orona.

Dominic Maciel said his father is of Mexican descent.“I have no problem with them wearing their Mexican stuff, their Mexican flags,” said Maciel. “I just thought I’d show my pride. American pride.” 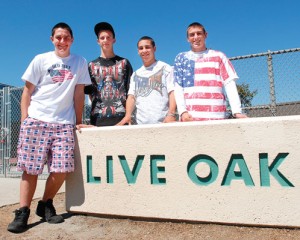 I had no idea Cinco de Mayo was now an American holiday to be respected and treated with the same respect the Forth of July is. This is a dangerous precedent indeed, but what concerns me most is the attitude of students like Sal Orona.

We frequently discuss the melting pot of the United States population, but historically, immigrants became fully assimilated – for lack of a better word – into the unique United States culture formed by our history, Founding Fathers and founding documents. With no doubt, our borders, language and culture defines America.

Now, we have some citizens – and many illegal aliens – who frequently talk of reconquista – the complete removal of the borders in North America – and the destruction of the United States as we know it. They think the Constitution is an outdated document, they think they have been repressed, they think they are owed.

The left threw assimilation out the window decades ago, of course. And educators no longer teach civic pride. It’s all about assigning blame, assuaging guilt, and stoking grievances. P.C. is the death of us.

Trade war with Mexico: American protectionism at its worst