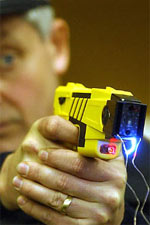 Of course they are being selective, you can’t expect them to actually stand on principle would you? California cities buckle when it comes to energy, water, traffic cameras and Tasers provided by Arizona companies.

Boycotts don’t work very well, primarily because the ones doing the boycotting often find out the boycott would actually be a burden for themselves. We wrote about the tiff between the Lost Angeles city council and the Arizona providers of electricity to southern California back in May, and we knew their would be more.

Today we read Lost Angeles makes a few dollars from traffic cameras set up at intersections throughout the city, and those cameras are provided by – through contract – an Arizona firm. As it turns out, $6 million dollars in revenue will guaranty your Arizona company a free pass for the wrongs committed by your state legislature and governor.

Los Angeles council members voted Wednesday to make an exemption to its self-imposed boycott of Arizona, opting to extend a contract with an Arizona-based company that operates enforcement cameras at Los Angeles intersections — a program that earned the city $6 million last year.

Los Angeles has led the boycott against Arizona over its controversial immigration law, banning most city travel to the state as well as future contracts with Arizona companies. The city council has argued that the law, which allows local law enforcement to check the immigration status of any suspected illegal, is unconstitutional and could lead to racial profiling.

Sacramento and Oakland – both with city council ordinances supporting boycotts – have implemented a number of waivers if their cities would have to suffer at all by actually going through with the boycott on Arizona.

An example would be Taser International – based in Arizona – who provides training, products and service for law enforcement agencies throughout California, including Sacramento and Oakland. From the New York Times…

[F]iscal realities make it difficult for cities to honor the resolutions. On Tuesday, Oakland, which faces a $31.5 million deficit, voted to approve a $1 million contract with a multinational advertising company that has corporate offices in Phoenix.

San Francisco, with a projected deficit of $483 million, also continues to do business in Arizona. Dennis Herrera, the city’s attorney, said the resolution was designed “very, very carefully” so that “it wouldn’t be a drain on the general treasury.”

The cities say they are still researching all contracts with Arizona companies.

San Jose stopped short of a full boycott, citing potential economic harm, and instead issued an official denunciation of the Arizona law. The city has contracts with several Arizona companies, including US Airways and Taser International.

The Oakland Police Department has spent $1 million on Taser equipment, with its last purchase in 2008.

The Clear Channel decision turned on the parsing of a single word.

Contracts with Arizona companies will not be considered in breach of the boycott as long as the companies are not “headquartered” in Arizona, city officials determined, although Oakland’s lawyers had yet to define that term last week.

“The meaning of ‘headquartered’ — I’m pretty sure that’s still in the works,” said Alex Katz, spokesman for the city attorney’s office.

Oh yeah, it’s in the works…