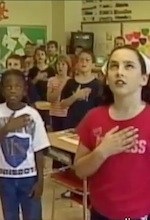 Well, one, it’s in Massachusetts, two, it’s Brookline, three … well you get the idea, right? A report from Boston’s Fox 25 news and a very merry one indeed. Apparently a Bay State law requires that state schools say the Pledge of Allegiance at the beginning of each say. This school in Brookline has been resisting. They finally have capitulated … once a week. But it gets even better.

The school will not require students to say it or teachers to read it, but the Principal will recite it over the loud speaker once a week. Progress. And oh yes, there’s more.

A Brookline school is now saying permission slips won’t be necessary for students to recite the Pledge of Allegiance.

The Edward Devotion School, which has not recited the Pledge of Allegiance in seven years, will say the Pledge over the school’s intercom once a week beginning next month.

Gerardo Martinez, the school’s principal, initially said the permission slips were sent to encourage parents to have a discussion with their kids about the Pledge.

The principal also says he sent this note out to parents just to let them know it was okay if they do not want their kids to participate.

A permission slip to pledge allegiance to your country.. Hmmm, well you know, no borders, no labels. I provide this clip from Fox 25 so you can see some of the reaction from the folks in Brookline, comrades.

Obamacare: the news from Massachusetts just keeps getting worse

Merry Christmas to all … especially those serving overseas and away from...
Scroll to top