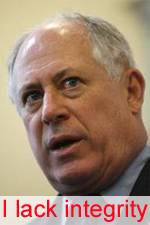 Let me make the point clear. By not walking out of this political rally – during his own introduction while he was on stage – Gov. Pat Quinn (D-Ill.) makes it clear he agrees with, or at least has no issue with, the statements made by state Sen. Rickey Hendon. This readers, is what Democrats think is civil.

Update: Here is the video including the comments transcribed below. Hat tip to RVO reader TomL for the pointer to the Breitbart post.

From the Chicago Tribune, with my emphasis in bold. Hat tip to Founding Bloggers. Big Government’s John Bambenek is also writing.

A West Side get-out-the-vote rally Saturday backfired for Democratic Gov. Pat Quinn when the governor was forced to quickly distance himself from racially charged criticism about his Republican foe made by the man who introduced him, Chicago mayoral candidate state Sen. Rickey Hendon….

Of course, now the weasel Quinn steps up and states he does not associate himself with the comments made by Hendon and he certainly will not apologize for them. That’s just pathetic, but what’s even more of a disgrace is that the crowd – including U.S. Rep. Danny Davis (D-Ill.) – got all into the wild sermon-type approach by Hendon, “clapped loudly” during at at the end of the introduction.

The pathetic excuse for a state leader went on to say…

“I don’t associate myself with those comments,” Quinn said when a Tribune reporter asked about Hendon’s comments. “I don’t talk that way. Everybody knows who I am. I’ve been around Illinois for many years. I have lived my whole life here. I believe in civility. I disagree with people in politics, like my opponent Sen. Brady. I don’t engage in name calling. Never have, never will.”

And yet, Bambenek notes…

[W]hile the remarks were made, he kept a constant distance of about 10 feet. And then he walked up to shake Senator “Hollywood” Hendon’s hand. That’s the exact opposite of distancing.

Let me tell you exactly what anyone with an ounce of integrity would have done when he heard that introduction and saw the crowd – the almost all union crowd – approving of Hendon’s comments.

He would have walked off the stage.

This boob – Rickey Hendon – announced he wanted to run for mayor of Chicago back in mid-September. With former U.S. Senator Carol Moseley Braun and Rahm Emanuel running in the Democrat primary – among others – Chicago is a place I’m going to stay away from for a long, long time.

I can’t find video, but if it shows up within the next day or so, we’ll post it.

So, what does Obama think of Chicago’s school voucher proposal?

Democrat majority could hurt liberal cause

What We Believe Part 2 & 3 – Elitism and wealth creation