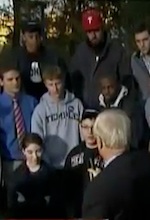 Have you ever wondered why, despite the claims of knowing what is best for our children and the millions of dollars thrown at the public education system, schools in cities and states exclusively controlled by Democrats aren’t the most wonderful and perfect schools in existence?  Where is the liberal utopia that is promised every election cycle?

To be sure, there are some excellent public schools (and some mediocre private schools), but they are located in rich communities like Weston, Newton, Wellesley, Medfield etc.  Shouldn’t the even (dare I say fair?) application of liberal educational theory produce high quality schools regardless of location?

Apparently not.  You may not be aware of it, but in Boston, MA, the presumed education hub of the universe, good public schools are at a premium.   As such, rather than improve the schools, the powers that be in Boston have decreed that access to the relatively best public schools will be determined by lottery.  I was stunned to discover this in the Boston Globe, which has been doing a series of stories on this, following the children from the Roslindale neighborhood in Boston as an example.  In a nutshell, to get into a good school, each student has to make a list of at least five schools (six or more are recommended), and the school system pulls the numbers to decide if you go to any of those choices.  Many parents, disappointed with the chosen school, send their kids to private schools.

What is the outcome?  Disappointed parents and kids, under educated kids, with the better students fleeing the public school system, further eroding the test scores of the public schools, and the problem of transportation to the distant schools.  Additionally, the system has the effect of destroying the neighborhoods, because the kids in the neighborhood are unlikely to attend the same and/or nearby schools (you can view one story of a girl that literally lives across the street from a good elementary school that she dreams of going to, but her parents were flatly told she could not attend (you will have to register with the Globe to view the story).  She sits in the window, overlooking a neighborhood school she could almost literally touch, watching her neighborhood friends who won the lottery go to class.

The system is being sold as a method that “gives all students a chance to seek a seat at better-regarded schools”, but clearly does not address the fact that students will have to attend lesser rated schools in neighborhoods far from their homes.  There are priorities, but they rely on siblings, school zones and “walking zones”.  Many of the kids must take the “T”, being dropped off by watchful parents, but you have to wonder about who watches the youngsters during the trip itself.  Parents are unlikely to be active and participate in the functioning of a remote school.

Effectively, this is the school busing problem all over again, but instead of race being the motivator, it is the quality of the schools.  Gone are the days that everyone in the neighborhood went to the same school, played together, studied together and traveled to school together.  Wouldn’t it just be simpler to get better teachers and administrators and throw out those that are not performing?  Wouldn’t it be easier to move around the teachers, so the quality can average out?  Are the unions getting in the way?  All of these schools are within the Boston Public School system, yet vary in performance.

According to Dr. Carol R. Johnson, Superintendent  of Boston Schools:

Cato: The reality of money and jobs in public education
4 replies

Krauthammer: Compromise or run the risk of being blamed for economic ruin
Scroll to top