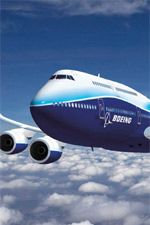 Boeing tells employees they would have definitely made some changes to the health care plans it offered for competitive reasons, but they point to the Democrat’s and Obama’s health care legislation, and lifestyle changes as additional reasons for change.

Boeing will be introducing 10 percent and 20 percent co-pays during the next two years and they will be increasing deductibles for individual and family plans. Boeing is known for offering generous health care benefits to employees, so generous as a matter of fact, the company is concerned many employees could eventually be hit by the 40 percent tax on so-called “Cadillac plans” that takes effect in seven years. They are trying to avoid that hit.

From second-hand experience, I know Boeing offered a very generous plan to salaried employees. During a discussion with an Boeing employee and his spouse, I was surprised about the very low out-of-pocket costs employees had. The discussion eventually led my “how $15 co-pays destroyed the health care system” topic and they both agreed the cost of mandates would be passed on to them.

Maybe the Obama administration and Democrats in Washington think the Boeing plan was too generous. … You think I’m being sarcastic don’t you?

In a letter mailed to employees late last week, the company cited the overhaul as part of the reason it is asking some 90,000 nonunion workers to pay significantly more for their health plan next year. A copy of the letter was obtained Monday by The Associated Press.

“The newly enacted health care reform legislation, while intended to expand access to care for millions of uninsured Americans, is also adding cost pressure as requirements of the new law are phased in over the next several years,” wrote Rick Stephens, Boeing’s senior vice president for human resources.

Two items to note. The union workers at Boeing are not feeling the pinch this year, but you can be certain future contract negotiations will be a hard-fought battle when it comes to passing along higher costs.

Second, Boeing’s primary competitor Airbus, has a health care plan primary shouldered by a single-payer government system. Everyone pays high taxes while being provided a lower quality benefit plan as compared to what Boeing employees are offered. With stiff competition between the two companies – including the business fight to supply the U.S. Air Force its refueling tanker – Boeing needs to monitor health care costs to ensure they can keep making planes.

Update: It’s not all about unhealthy lifestyles – as an example the diabetes epidemic – it’s also about the increase in the use of drugs, MRIs, joint replacements and non-evasive surgeries that actually make our lives better every day.

Now remember everyone, the big bad insurance companies have almost nothing to do with these price increases. Boeing is self-insured, meaning payments to physicians, hospitals and other health care providers comes directly from Boeing, with a health insurance company providing the service to administer those plans and benefits only. Boeing builds the plans, Boeing makes the decision what they will and will not cover.

[M]assively comprehensive plans really are a part of the problem in escalating health-care costs.  They completely screen pricing information from consumers, which leads to overuse of the system.  They also shift massive amounts of compensation away from employees and to insurance companies, although employees generally don’t see it because that system has been in place since World War II and the wage mandates from the federal government.  Any real reform effort would have to start at disconnecting the employer-health insurance connection, and in pushing people away from massively comprehensive insurance in favor of HSAs and serious/catastrophic insurance coverage.  Only in that direction can we restore pricing mechanisms that produce supply to meet demand.

I want to point out that I think Morrissey overplayed the Obamacare part of the cost equation, and underplayed the lifestyle part of the equation in his post. Remember that Boeing stated competition was the main factor in play, with Obamacare second and lifestyle third.

That said, he made a great point about companies working to get their benefit plans under the magic Cadillac rating dollar figure. The Democrats were counting on billions of dollars in tax revenue to help offset the cost of this boondoggle.

Obamacare – No dentists within 100 miles

The genius of the Øbama NLRB bureaucracy
8 replies

MSNBC strikes again: Why are so many women in the … Tea Party?