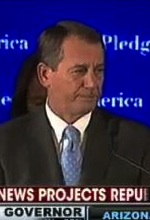 Two videos for you who feel a bit wishy washy today. Understandable, especially if you live in New England, eh? The first is John Boehner in his victory speech. Inspiring. The second from Rand Paul, defining American exceptionalism.

The new Speaker of the House (damn that sounds fine) John Boehner spoke elloquently about what the new Republican party stands for. He outlines what the party will do, and asks the President to join him. Unlikely, but for those who think the Republicans didn’t hear you, listen up.

Rand Paul had his own special moment last night. Taking the time to explain American Exceptionalism to not just the people of Kentucky, but America. Pay close attention lefties.

One final video to pick up your spirits, from the presumptive new Speaker. Boehner takes a little time to explain why he believes in America, because he sees the results of believing in oneself. Very emotional. Very nice.

This is a new beginning. Make no mistake, they will not back down. This is not the end, this is not over, this is the beginning.

Boehner to Hoyer: You sound like the “dog ate your homework.”

Obama to Boehner: “We don’t have a spending problem”

You crazy wacky libertarians you.
18 replies

Mark Haperin: The Obama coalitions are dead, including the …. media?
Scroll to top