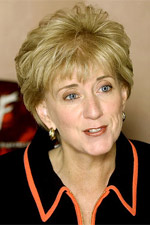 Interesting. The margin of error for this Rasmussen poll is 4 points, after surveying 750 likely voters in Connecticut the two days after the most recent – and last – McMahon vs. Blumenthal debate. Blumenthal 51 percent, McMahon 46 percent, while 4 percent are undecided or want someone else.

With a 5 percent difference and a 4 percent margin of error, McMahon optimists can claim the race is a toss up when referring to the Rasmussen poll results released today. Less than 10 days ago, Blumenthal had an 11 point lead in a similar poll from Rasmussen. One thing is for certain, the entire “McMahon-wants-to-lower-the-minimum-wage” kerfuffle backfired for the Democrats, and the left’s negative ads are not working either. They put in a bunch of effort, clout and money to break the lead wide open … and screwed up.

The latest Rasmussen Reports statewide telephone survey of Likely Voters shows Blumenthal, Connecticut’s longtime attorney general, picking up 51% of the vote. McMahon, the former CEO of World Wrestling Entertainment, earns the vote from 46%. One percent (1%) prefer some other candidate, while three percent (3%) are undecided.

Of course, our free-flowing budget here at Radio Vice Online does not allow us to purchase the Rasmussen Platinum service with the cross-tabs and the rest of the results, but I know our friend Ed Morrissey has access so expect him to chime in shortly over at Hot Air.

I’m wondering about the second question concerning favorability ratings for which I currently do not have the results.

Obama to Connecticut … ummm no!

Richard Blumenthal, the Man, the Myth.

See You in November … the musical
Scroll to top