Trust me on this. Even if the legislation demands additional border enforcement, you won’t see it. They will just ignore that part of the legislation since they know nobody will do a damn thing about it. The flood of amnesty requests that will “require” a background check will be run through a “rubber stamp approval” factory as only a few applicants will go through proper checks.

Based on e-mails and documents obtained through the Freedom of Information Act (FOIA), Judicial Watch’s report revealed that DHS agents were operating under irregular and inconsistent orders on how to manage Deferred Action for Childhood Arrivals (DACA) applications. This resulted in DHS moving in September 2012 to a “lean and light” system of background checks, with only a few randomly selected applications being processed.

Then on November 9, 2012—three days after the re-election of President Obama—the entire agency was told to “put all DACA work on hold until further notice.” Judicial Watch received no other documents indicating how or when DHS resumed background checks—if they have even resumed at all.

You read that correctly. More at Judicial Watch and you need to read this post too. Judicial Watch is doing the work the main stream media refuses to do. They are filing FOI requests all the time, digging up clear evidence the Obama administration has little interest in completing background checks or enforcing current law when it comes to illegal aliens within the United States. 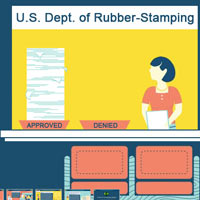 NYC legislation does not forbid cops from transmitting description of subje...

Weather is not getting more extreme
Scroll to top