I’m not one to blame one person for the current unemployment rate. Many factors are involved and it’s just too complicated to blame it on one person or one administration. Bloggers and the media do like to place blame (it’s sexy) but I’m not sure displaying a graph comparing average rates during a president’s term is helpful.

The federal unemployment figures have just been released, and nationally we’re at 9.5 percent, up one-tenth of a point from last month.

I’m thinking that current federal policy is not helping the employment situation in the United States, but you need to consider the normal delays that occur during the economic cycle. I think the unemployment rate was heading towards “bad” last summer and is being made worse by the current administration.

That said, I don’t think the following graph – highlighted by Jim Hoft at Gateway Pundit – is helpful. Yet. 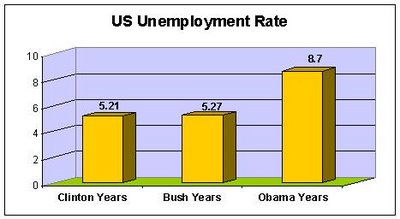 Exit questions: At what point can we really use a graph like the one above? When is the media going to put all the blame on the Obama administration?

Jim Geraghty from The Campaign Spot has the graph and links us to the full post at Innocent Bystanders. 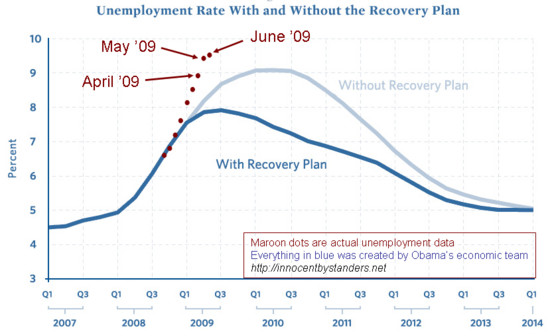 Michelle is waiting for the current administration to blame the previous. Ed at Hot Air notes the only show of growth anywhere is in government.

Clearly, the nation is heading in the wrong direction.  There isn’t a single sign of job recovery in this latest report despite four months of Porkulus spending.  Not one single sector except for government shows job growth, or even a hint of it.

Three months ago, Obama bragged that his stimulus had begun to create a “rush” to hire construction workers.  Since then, the construction industry has lost over 120,000 jobs, and this month’s report shows that trend accelerating at a season when construction should normally be hiring.