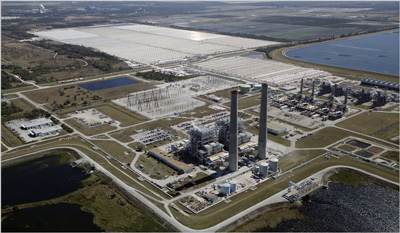 Not unexpected. After reading the headlines, are ya having flashbacks of playing with a magnifying glass when you were a kid? A report released by the National Fish & Wildlife Forensics Laboratory indicates birds and insects are being torched by massive mirrors at solar plants in southern California.

“Although not analyzed in detail, there was also significant bat and insect mortality at the Ivanpah site, including monarch butterflies,” the report said. “It appears that Ivanpah may act as a ‘mega-trap,’ (original emphasis) attracting insect-eating birds, which are incapacitated by solar flux injury, thus attracting predators and creating an entire food chain vulnerable to injury and death.”

Solar flux is the intense radiation coming off the reflecting mirrors. At Ivanpah, the radiation is so intense it creates what look like small clouds around the boilers at the top of the project’s three 459-foot-tall solar towers. These clouds appear to be attracting the insects which in turn attract the birds.

Ok… here is where it gets a little gruesome, with my emphasis. From the report.

Ivanpah employees and OLE staff noticed that close to the periphery of the tower and within the reflected solar field area, streams of smoke arise when an object crosses the solar flux fields aimed at the tower. Ivanpah employees use the term ‘streamers’ to characterize this occurrence.

When OLE staff visited the Ivanpah Solar plant, we observed many streamer events. It is claimed that these events represent the combustion of loose debris, or insects. Although some of the events are likely that, there were instances in which the amount of smoke produced by the ignition could only be explained by a larger flammable biomass such as a bird. Indeed, OLE staff observed birds entering the solar flux and igniting, consequently becoming a streamer.

Remember now, a good portion of our energy future is wind and solar. The president says energy prices must necessarily skyrocket so we can kill more birds at a faster rate to supply energy that is more expensive and not as dependable. That will solve our manufactured energy “crisis.”

I could easily forgive the birds deaths if it were serving as a competitive and cost-effective alternative form of energy. The oil industry, for instance, ends up killing some wildlife in their production processes, too, and plain ol’ tall buildings bring down plenty of birds every year — but the problem is that this Ivanpah solar farm is not serving as a competitive and cost-effective alternative form of energy. It was only built because it received a $1.6 billion loan guarantee from the Department of Energy, on top of the tax credits and renewable portfolio standards that are otherwise propping it up, and the concentrating solar power (CSP) technology it employs comes nowhere close to providing energy as affordable as the value we’re currently getting from natural-gas plants.

Another solar company crashes into the sun – Solar Trust of America

California is in the news again…
10 replies