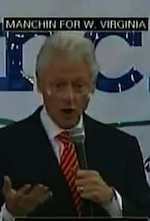 Hey, I thought we were mobsters. Still think they’re not taking the movement seriously?

This is Bill Clinton campaigning yesterday in West Virginia for Governor Joe Manchin, the Democrat candidate for US Senate, the old Robert Byrd seat. Manchin, is a very popular Governor and there is no way the Republican John Rasese should be in this race. But after a Democrat agenda that included Cap and Trade which in effect is an all out war on West Virginia’s number one product, coal, the voters there have decided it’s time for a change, as the Republican has made this a too close to call race.

So how do you get those folks to vote for a Democrat. Unbelievably, but maybe not for the great triangulator, they have turned to the Tea Party.

The Democrats can read the hand writing on the wall … but it all comes after being called racist, mobster, astroturfing radicals. Too late, Bill. Too late.

Matthews: The Tea Party is just like Muslim Brotherhood-"nutbags"

Make no mistake ... this is grass roots

Those Chilean miners would be dead if they were in the ... Tea Party?

The Age of Divisiveness
2 replies

Matthews: The thrill is gone

Diane Sawyer reminds Democrats a few busloads of voters could change this e...
Scroll to top