This graphic stunned me … from the Fox New Opionion Dynamics Poll. Read more. Most Americans think most Americans mostly depend too much on government. But most people think government mostly should do most things for them …

My favorite … “It’s the government’s job to make sure all Ameicans have food, housing (if you can’t addord it or I guess if you flipped and got caught too) and a job”. 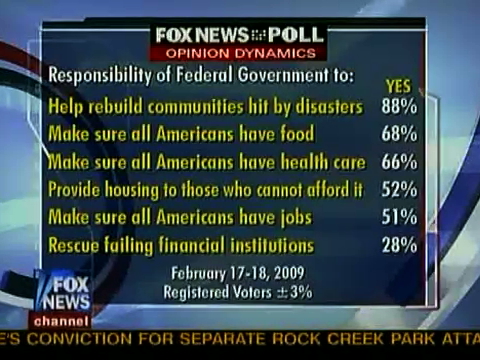 Now I understand that even libertarian “lite” ideas scare and shock many people so I assume I will face much criticism for saying that it is not the government’s job to provide food or housing or jobs for its people. It’s umm, well, let’s make it a poll, shall we? And let’s see how much you have learned by listening to the show.

The poll’s on the right … Whose responsibility is it to provide food and jobs and housing?

The Government, Partially the Government, Business, the Individual, or all of the above. By the way … there is only one correct answer if you are wondering.

And here’s a video to chew on while you are pondering the question. Mort Kondrake thinks this kind of thought will backfire on Democrats. I am not so sure but I can dream can’t I?

Confirmed again - Schwarzenegger not a conservative
The Revolution Has Begun
ACORN: Who will be fired in Philadelphia? Housing, prostitution, fraud
Rep. Chris Murphy Doesn't Get It
Expansion of federal government - mission creep
Boehner Live Blogging Budget Debate - Good or Who Cares?
Democrats Blame Bush for Everything - PROVE IT
When is Too Much, Too Much?
3 replies

Dodd’s Irish Country Cottage You Gunna Eat All That?
Scroll to top