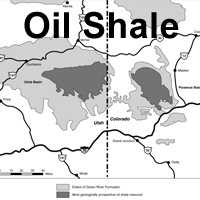 One of the energy issues Ukraine is currently dealing with is the high cost of natural gas imported into the country from Russia. I wrote about the situation earlier this month. During Vice President Biden’s visit, the U.S. delegation plans on providing some advice to the country on how to increase gas production … fracking!

Ironic. From a Reuters piece on Biden’s visit.

Biden told the legislators it would take time for Ukraine to achieve energy security but it was within the country’s power to do so.

“Imagine where you’d be today if you were able to tell Russia: keep your gas. It would be a very different world,” he said.

And just how would Ukraine be able to increase domestic production of natural gas? From John Fund at National Review.

Vice President Joe Biden is in Kiev today meeting with Ukrainian leaders. One of the gifts he is bringing is a package of technical assistance on how to boost production in Ukrainian natural gas fields and the extraction of what one U.S. official accompanying Biden called “unconventional” gas resources. In the U.S., we call that “fracking,” the procedure by which fluid is injected into cracks in rocks to force them open, allowing oil and gas to flow out.

Now, fracking does not work everywhere simply because the geological differences around the world, but research indicates fracking would work quite well in Ukraine. From the New York Times last November.

On Tuesday, Chevron signed a 50-year agreement with the Ukrainian government to develop oil and gas in western Ukraine. The government said that Chevron would spend $350 million on the exploratory phase of the project and that the total investment could reach $10 billion.

Over five years, Chevron says it hopes to conduct seismic surveys and to drill exploratory wells on a 1.6 million-acre area called the Oleska Block, which is heavy with shale rock deposits. The effort is likely to include hydraulic fracturing, or fracking, of the shale rock to see if oil and gas can be produced in commercially viable amounts.

Of course, the environmentalists out there are not in favor of fracking because they think the water supply will be contaminated. Russia actually expressed their “deep concern” about fracking in Ukraine. But hypocrisy exists outside of the U.S., as Russia has employed fracking techniques to get oil for years. My emphasis.

On several occasions in late 2013 and early 2014, Russian officials have warned Europeans against following the U.S. lead in exploiting domestic natural gas and oil. Moscow has warned Europe that hydraulic fracturing (fracking) is a substantial danger to the environment and to public health. The irony of this is that Russia itself has been engaged in fracking for several years in Western Siberia and is now using technology acquired from Western companies such as BP to increase the use of vertical and horizontal drilling to extract gas from shale deposits.  The obvious explanation for Moscow’s warnings is an attempt to prevent Europe from developing gas and oil sources, thereby reducing Russian’s near monopoly position in supplying gas to Europe, and especially to the Central Europeans, who are most vulnerable to politically motivated disruption of shipments from Russia.

In early March … Ukraine issues “will not” affect US/Russia...
Scroll to top