Gee, I wish I had figured that out on my own. Vice President Joe Biden has stepped up and admitted new laws would probably not stop all mass shootings in the future.

Say it isn’t so Joe! Please do read this entire post and share with everyone you know!

“Nothing we’re going to do is going to fundamentally alter or eliminate the possibility of another mass shooting or guarantee that we will bring gun deaths down to 1,000 a year from what it is now,” Biden told reporters Thursday afternoon after he spent over an hour lunching with Democratic senators at the Capitol.

Nothing that we can do to bring gun deaths down? Well how the hell have we been bringing overall homicide deaths down in the United States for the past 17 years? The total number of homicides – per US Department of Justice figures – was 23,180 in 1993, and about 13,900 in 2010.

Why won’t politicians claim partial victory when it comes to violent crime and murder rates?

I completely understand that 13,900 homicides can not be considered a normal or acceptable figure, but could you imagine a federal government politician who helped to successfully reduced the national debt by 40 percent not going out patting themselves on the back?

That’s an analogy as to what United States has accomplished when it comes to crime. We’ve all worked to reduce the murder rate by 40 percent in the United States. Are you one of the people who claim that figure would be a lot higher if it was not for our improvements in emergency medical care? OK, then let’s look at the overall violent crime rate in the United States between 1992 and 2011.

The overall violent crime rate is down 49 percent from 758 per thousand to 386 per thousand. Between 2007 and 2011, the number of violent crimes that included use of a firearm dropped more than 12 percent.

Yeah Steve, but what about firearm deaths?

Excellent question. Gun control advocates would have you believe more firearms in the hands of the population has greatly increased the number of firearm deaths and injuries, but that is not the case at all. The rate of all gun deaths per 100,000 people has remained steady between 1999 and 2011. Here is a chart from GunPolicy.org, which is hosted by the Sydney School of Public Health at the University of Sydney and has nothing to do with the NRA. (The gun death rate probably is effected by better critical care.) 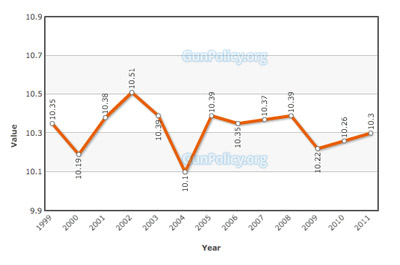 Also, the total number of gun deaths in the United States went up 11.4% between 1999 and 2011, but it would be irresponsible to present that number without reference to the gun death rate, which has not changed.

How about the number of guns sold in the USA each year?

That’s actually a difficult question to answer since many sales between private individuals within the same state do not require a background check. We can sort of extrapolate how many sales happen by tracking the number of FBI background checks completed for all new and most used guns. Keep in mind the following:

There is zero correlation between the number of guns being purchased and the death rate per 100,000 individuals in the US.

Please inform your friends and family that we are doing an excellent job when it comes to the overall reduction of violent crime. Congratulate the next politician you meet. We do certainly have additional work to do, but we have been going in the right direction.

And how many more guns have been legally purchased in the last decade?

In Virginia, mother who kills baby can not be charged

Good To Know: Another Biden Moment

Too much: Biden takes a nap during “O’s” budget retort

Call him “schmoozer in chief.”
3 replies

Symptom of the Disease: Candidates for president spent $7 billion on 2012 e...