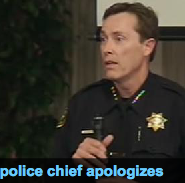 What the heck was this guy thinking? Journalists make mistakes all the time. Sometimes they are corrected and sometimes they are not. But a police chief sending another cop to someone’s home and knock on their door to demand a correction after midnight?

Strange stuff does happen in Berkeley. During a meeting with the community concerning a terrible beating death in the city, Police Chief Michael Meehan apologized for not getting information to the public quicker after the crime. Residents could not get much information about the mid-February beating death of Peter Cukor outside of his home, but a 23-year old man was charged with murder close to the scene.

As it turns out, Cukor had called the Berkeley police non-emergency line and asked for help. That call was given a lower priority since Berkeley PD needed to stage for – get this – a “potentially volatile” Occupy Oakland protest march that was scheduled that evening.

Following the death, police said they did not respond to a first call for help from Cukor that came in on the non-emergency line because they were only responding to calls classified as priority one emergencies.

Cukor’s first call for help was labeled a priority two call and put in a queue because the department was changing patrol configurations to keep an eye on an Occupy Oakland march that was set to come into the city that night, Meehan said. Police responded immediately to a second 911 call 14 minutes later at 9:01 p.m. by Cukor’s wife who said her husband was being beaten…

Oakley’s story posted online at 11:20 p.m. Thursday reported that Meehan apologized to the community for the slow response. Meehan though, said he apologized only for not informing the public right away. Meehan called and emailed Oakley about the story, but Oakley was asleep.

So, Meehan sends a fellow officer to knock on Oakley’s door after midnight to demand a change. To her credit, Oakley said the sergeant was very embarrassed about the whole thing, but Oakley made the changes to the article.

This is a good example of someone with power making a really bad judgement. What do you think should happen to Chief Meehan?

I got a kick out of the following video news report about the incident. Guess why? The reporter on the scene got the information wrong. I know, totally ironic. He refers to the slow response to a 911 call which was not the case at all. The first call was to the non-emergency line asking for help, and the second 911 call was responded to immediately.

Should he be expecting a phone call from the Berkeley PD requesting a correction?

Short ad before the video clip…