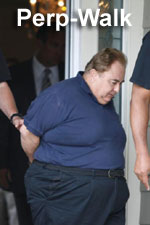 For years, my teachable moments have focused on retuning power to the states and the people. We have incrementally transferred power – like education funding – to the feds. As I point out in my symptoms of the disease series, corruption frequently is on display in Congress. Some say moving power to states and local communities will simply move the corruption. Maybe so, but we’d get some kick-ass local perp-walks.

States and local communities tend to go after corruption with a vengeance. Remember, my point is simple … if we want to fund projects that are local in nature and not specific to the national welfare (good for the entire nation), we must fund those projects with local and state dollars. 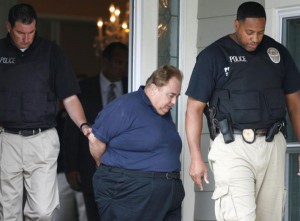 If you really want that new school, library, fire truck, community center or new bridge over Middle-of-Nowhere Creek, you’re going to have to pay for it yourself and not beg and plead for federal grants, matching funds or guaranteed loans.

The argument from many RVO readers is the corruption will never end, and it would just move from the halls of Congress and lobbyists in Washington, D.C. to the state legislature and local communities. Maybe that is partly true, but you don’t see these kind of perp-walks in the nations capital do you?

I prefer my politicians with the purse strings to be close by so we all can keep an eye on them. Don’t you? From the Los Angeles Times, with my emphasis in bold.

No details have been released, but a source not authorized to speak publicly about the case said that Rizzo; former Assistant City Manager Angela Spaccia; Mayor Oscar Hernandez; Councilmembers Luis Artiga, Teresa Jacobo and George Mirabal; and former Councilmembers George Cole and Victor Bello were among those arrested. …

A neighbor of Hernandez said authorities used a battering ram on his front door after he failed to answer the door.

“They broke the door down,” said the neighbor, who only gave his name as Jose. “They knocked down the door and they brought him out in cuffs.”

Now, why this community did not recognize the issue from the beginning is another totally separate problem. Maybe the community was so focused on what leadership in Washington was doing – or doling out – they were completely blind to the corruption in their own back yard.

A side note about media reporting concerning the Bell, Calif. city council scandal from Newsbusters.

Thus far, every major news outlet that has reported on the story has omitted the fact that all eight individuals arrested are Democrats.

These glaring omissions come only weeks after NewsBusters reported that of the 351 stories on the then-brewing controversy, 350 had omitted party affiliations, and one had mentioned they were Democrats only in apologizing for not doing so sooner.

Confirmed again – Schwarzenegger not a conservative

Video: Why corruption thrives in Washington

Two more Democrats concerned about their party, and, the country
5 replies

We do not need another “Contract with America”