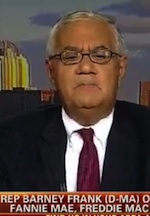 I watched the entire Neil Cavuto interview last night with Barney Frank and I was stunned. Stunned at how Bawney kept patting himself on the back for being the only one to recognize the weakness of Fanny and Freddie, how he tried to hard to make reforms but was blocked by Bush every step of the way, and how we now need to throw Fannie and Freddie under the bus. Which doesn’t fit and why?

Ace of Spades has done an enormously awesome job of collecting video that reveals the true Barney Frank from 2004 on when President Bush began, unsuccesfully to reform a faltering Fannie and Freddie; two Government sponsored entities that used the mortgage house of cards to enrich Democrat after Democrat after Democrat.

Neil let him skate on just about every claim and my guess is he did not want to let it devolve into a Bill O’Reilly slug fest but still. A few videos for your purusal but to see the entire breakdown you must go to Ace.

First … here’s Barney Frank two nights ago on Cavuto. Make special note of not just how he wants Fannie and Freddie dissolved … but also on how he claims to have been the only one who saw this years ago.

Now, here’s the Fox report on the problems with Fannie and Freddie they assembled two years ago and to this day is the most watched video I have ever posted.

And just for kicks, let’s through this video in that O’Reilly aired last week.

And just for kicks:

Let’s recap shall we:

Fannie and Freddie, under direction from Congress, encouraged this kind of irresponsible lending in order to bring the dream of  home ownership to people who would otherwise not qualify. Big heart … bad business.

Fannie and Freddie guaranteed these loans as well as buying, packaging and securitizing them, but since they themselves were under-capitalized (I believe their capital reserve requirements were a mere 1% of guarantees — not sourced) … the whole shabang imploded as mortgages collapsed.

One more thing to note here. President “W” tried valiantly to clamp down on Fannie Mae and Freddie Mac in 2003 and 2004 by proposing regulations that would force them both to increase their reserve requirements and tighten lending standards. That bill was rebuffed by none other than Senator Chris Dodd (D, Countrywide) who promised a lengthy filibuster. The bill Reform died in 2005. Three years later the economy collapsed.

UPDATE: From the wayback machine. Karl Rove last year explaining how Bush’s attempts to clamp down on Fannie and Freddie were blocked.

UPDATE 2: Here’s another backgrounder on President Bush his attempts to control Fannie and Freddie.

Cavuto on his critics, fame and pain

The selling of a mini van! Middle America with sex and swagger.

The 9-11 Families Remember UPDATE: Mischief In Manhattan
Scroll to top