This could very well be the funniest post on you mobsters out there that I have seen. I have included just one of the pictures from a Town Hall in St Louis … posted by St Louis talk show host Dana Loesch. Click to see full size version. 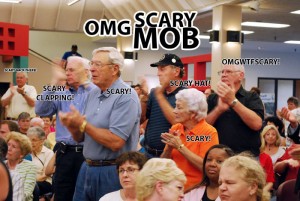 Please go to Dana’s site to see more. She was on with Gretta last night and she’s a kick. I will try to get her on the show. If you go, leave a message and let her know where you saw it. H/T Instapundit.

Greetings citizen! By now you may have heard scattered rumors of state and party officials encountering reactionary resistors at local health care reform information programs. Do not be alarmed, for our 5-year plan for citizen health proceeds without delay. Remain stalwart! The truth can be told at last, that these so-called “protests” are merely the desperate rear flank mob actions of dead-end bandits and saboteurs in the pay of enemy insurance agents.

Read the whole thing. It will make you laugh.

What's not to like about socialized medicine? Update: Video

Change we can believe in ... or else